Follow the instructions below to learn how you can debug your game's Windows binaries (running via Proton) on a Steam Deck developer kit. You'll need to bundle the Windows debug runtime with your game when you upload it to your developer kit, and Visual Studio & remote debugging tools running on your Windows development box.
This feature is still under development. Please leave any feedback / issues on the Steam Deck Developer Forums.

Be sure to see How to load and run games on the Steam Deck Dev-Kit to upload and run your game on your developer kit. Make sure to bundle the Windows debug runtime (details below).

The Windows debug runtime is not distributed with Proton. You will need to bundle the debug runtime DLLs with your build. See https://docs.microsoft.com/en-us/cpp/windows/preparing-a-test-machine-to-run-a-debug-executable for details. For Visual Studio, a Debug deploy configuration should work. The project properties has an advanced option to 'Copy c++ Runtime to OutDir' that can be helpful for C++ projects. 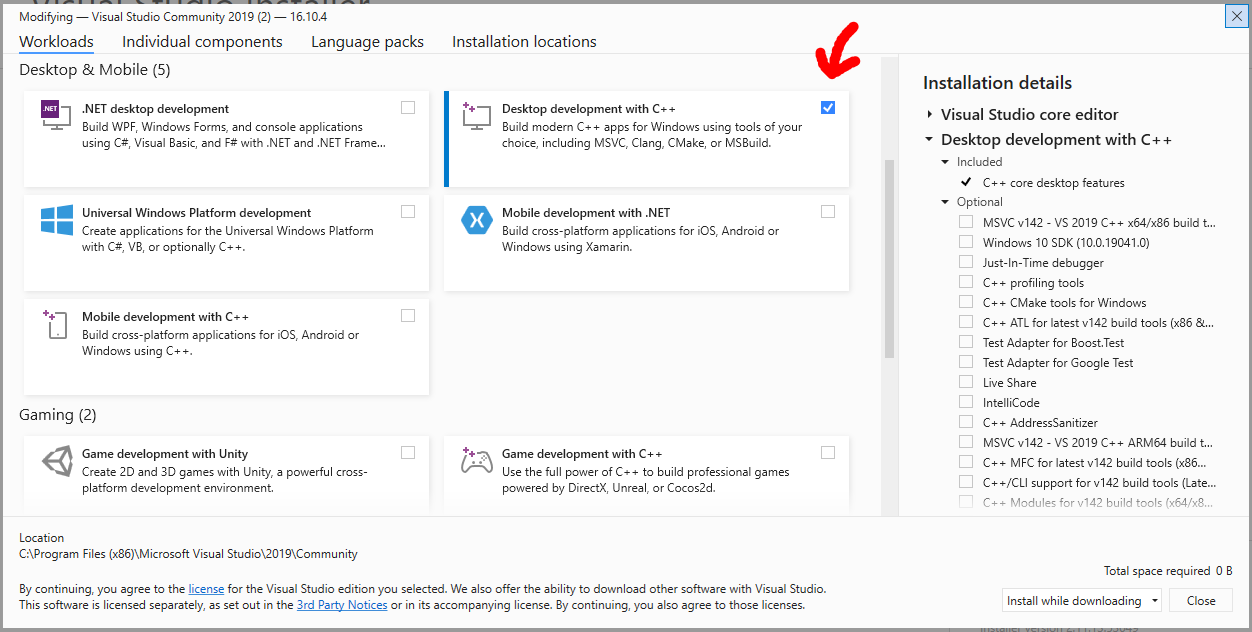 The project Vulkan Examples is a good starting point for getting used to remotely debug games uploaded to the Steam Deck devkit.

This will create a build/windows/bin/Debug directory that contains the imgui executable, the required Windows debug DLLs and the data assets.

At this point you can upload the resulting Debug directory.

By launching the game a msvsmon server for remote debugging will automatically start too. 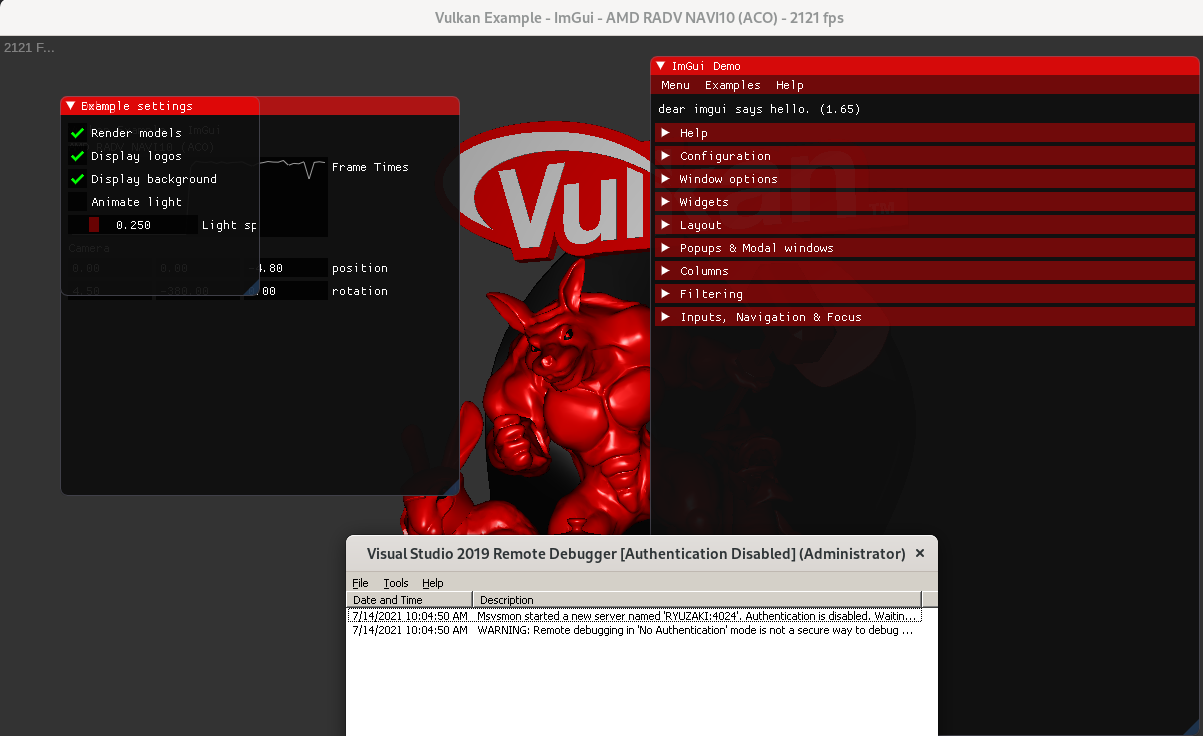 Finally you are now able to attach a debugger to the running game.

In Visual Studio press Ctrl+Alt+P to open the Debug > Attach to Process. In Connection target set the IP and port of the msvsmon server, and then select the imgui.exe process. 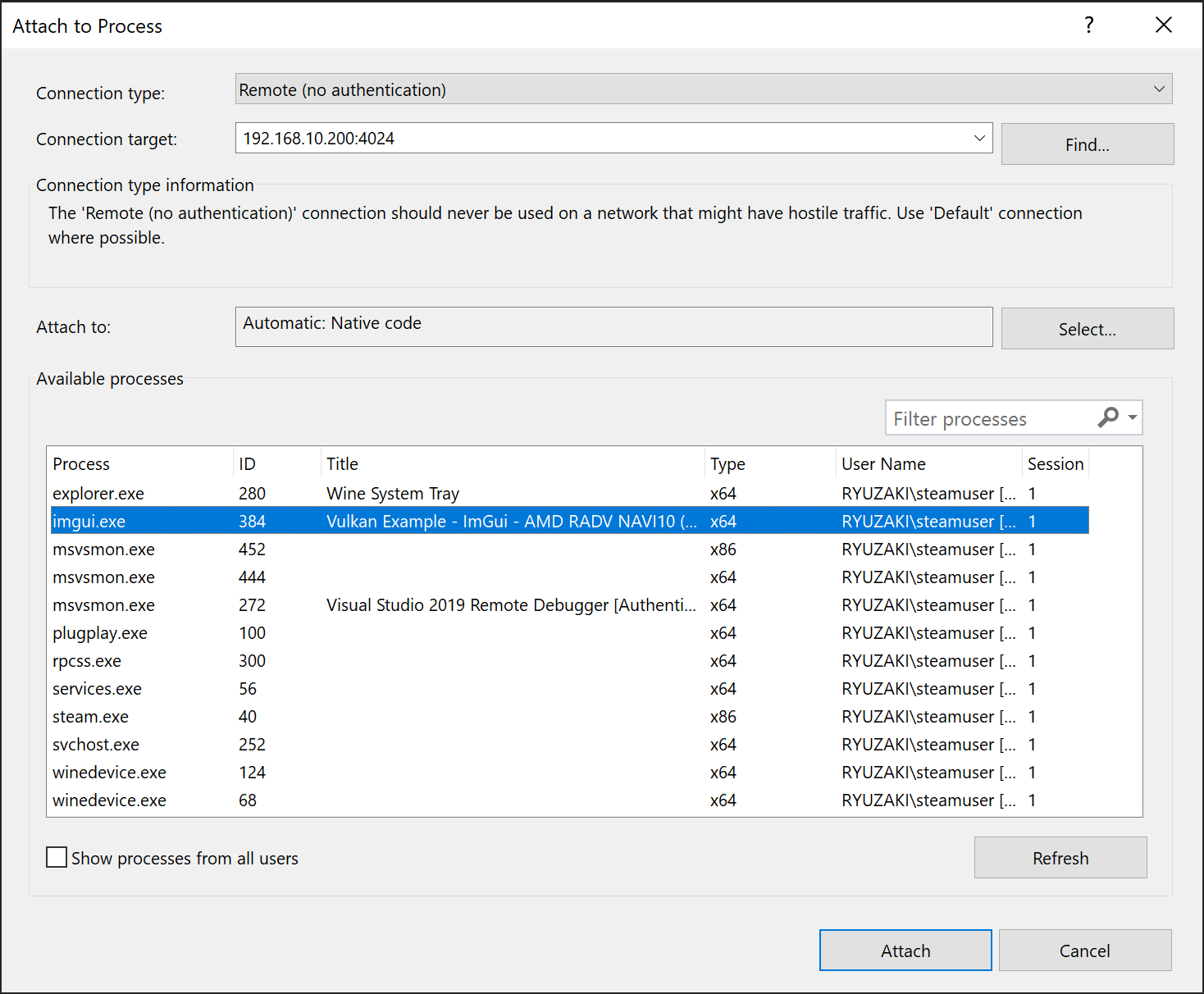 For a detailed step-by-step guide you can follow the Microsoft debugging documentation.

Create an Epic Games account, if you don't have one already, and then download and install the Unreal Engine 4.

As an example we are going to use one of the sample projects that the Unreal Editor offers. Create a new project and choose the "Puzzle" template 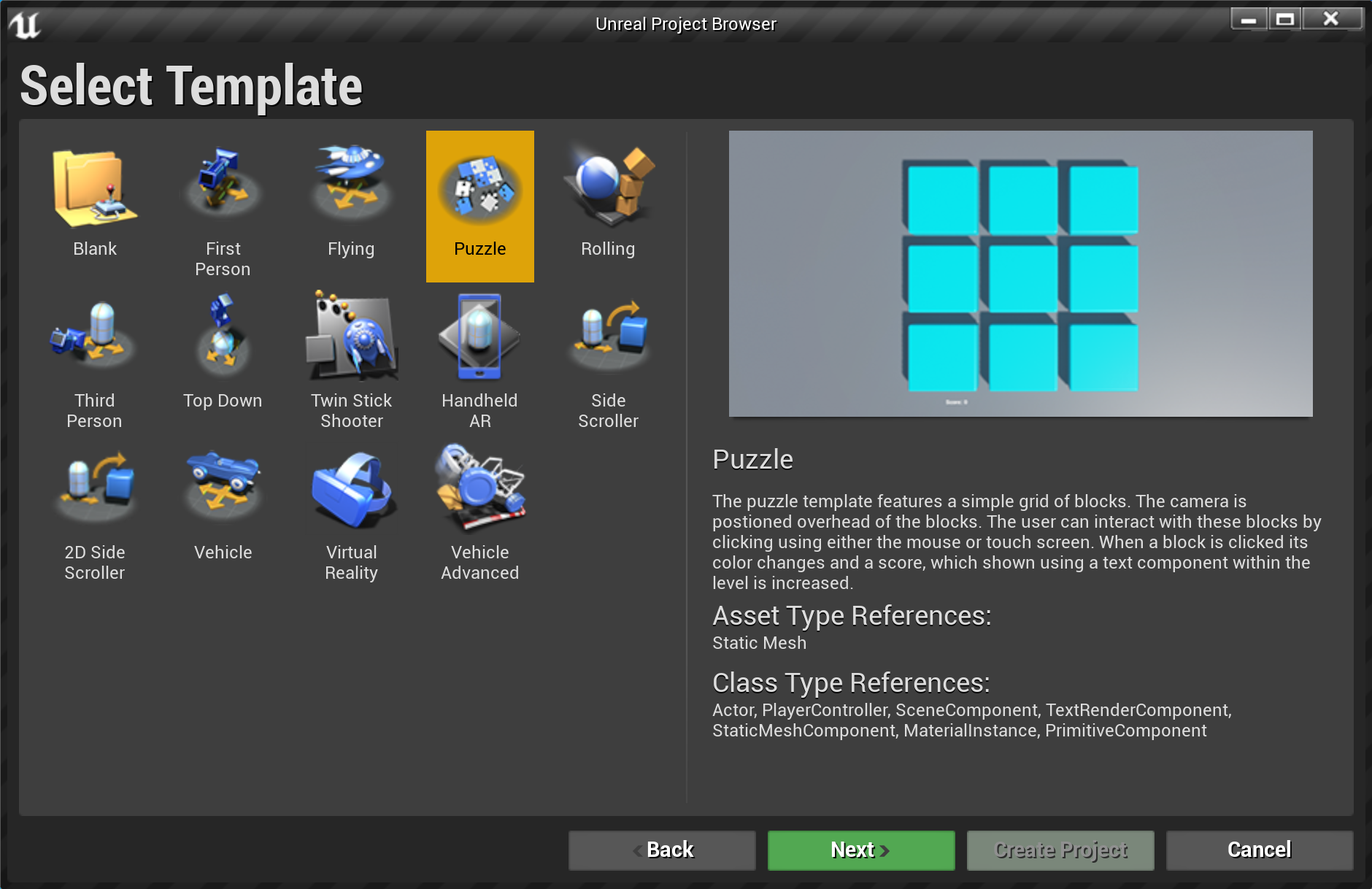 Select a project name and a location 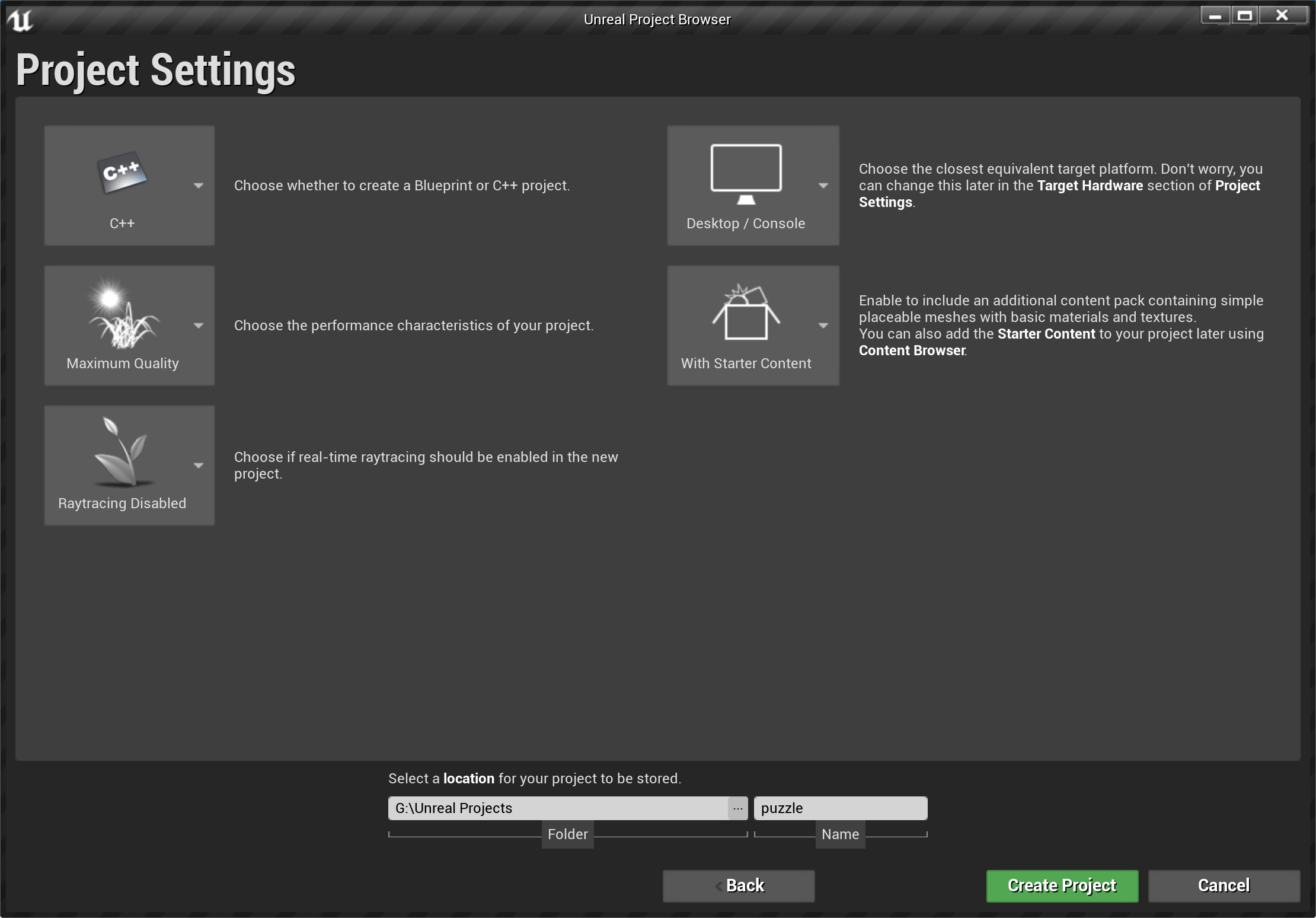 Go to Edit->Project settings->Packaging and choose either "Debug" or "DebugGame" as the build configuration. You can find more information in the official documentation. If you tick "Include Debug Files", the debug files will be included in the packaged game. 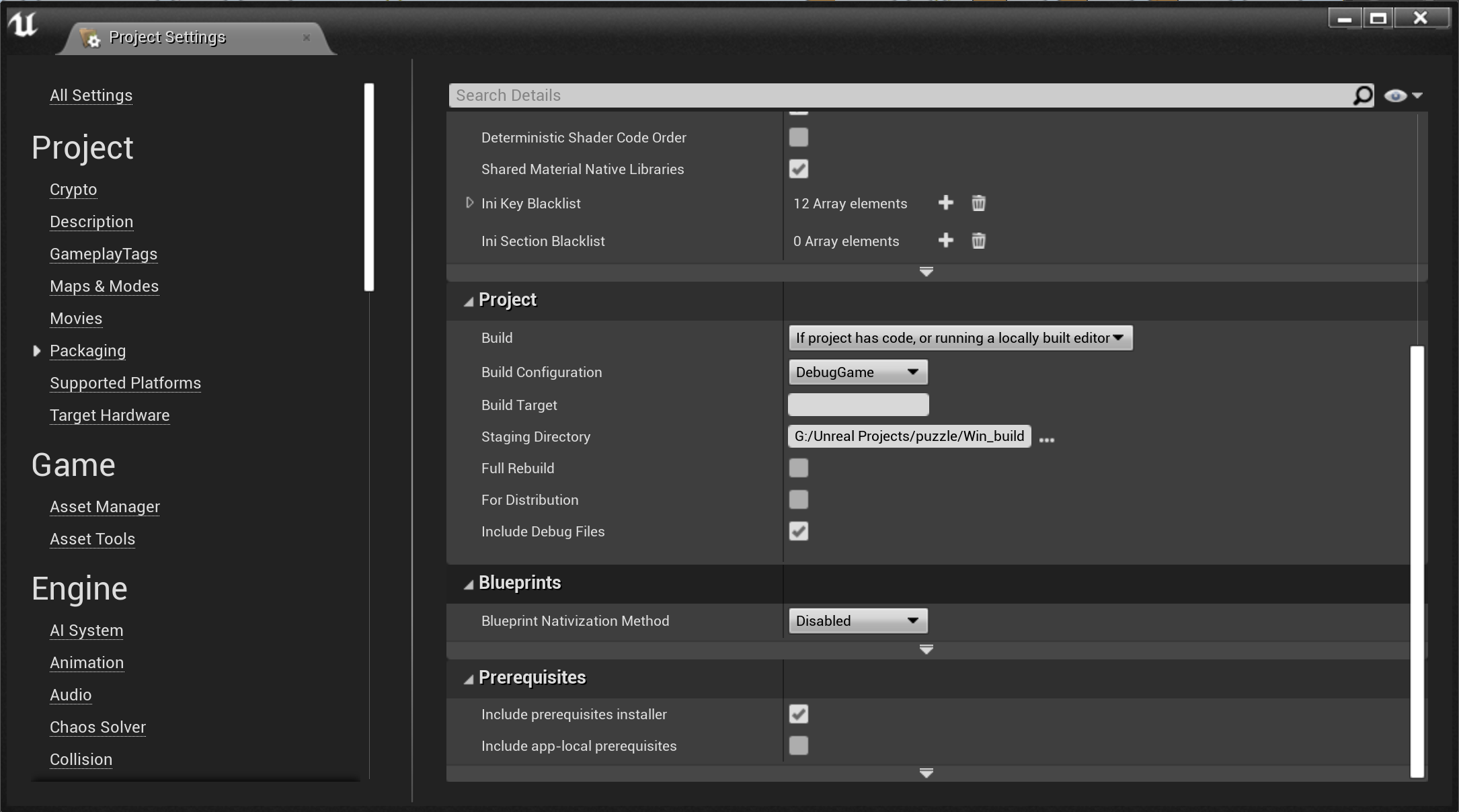 If you are not able to compile a native Linux build, e.g. if your game has external dependencies that don't support Linux, you can start a Windows build by using File->Package Project->Windows (64-bit). This will create a build in a new directory called "WindowsNoEditor".

In the Steam library you should have a new entry with a name similar to Devkit Game: puzzle. By launching the game a msvsmon server for remote debugging will automatically start too.

As the last step you can now attach a debugger to the running game.

In Visual Studio press Ctrl+Alt+P to open the Debug > Attach to Process. In Connection target set the IP and port of the msvsmon server, and then select the puzzle.exe process.

For a detailed step-by-step guide you can follow the Microsoft debugging documentation.