What they are good for

In addition to providing highly-valued rewards to players of your games, achievements are useful for encouraging and rewarding teamwork and player interaction, providing extra dimensionality to the game objectives, and rewarding users for spending more of their time in-game.

Statistics track fine-grained pieces of information, such as playtime, number of power-ups used, etc. You may choose to use them simply for tracking internal game data - so that, for instance, you can grant an achievement based on multi-session game play statistics collected from the user across multiple computers.

Define Your Game's Stats and Achievements

Achievements are application specific and are setup on the App Admin page of the Steamworks partner site.

There are three types of statistics your game can store:

Achievements have the following properties:

The following is the list of achievements from the Steamworks API Example Application (SpaceWar): 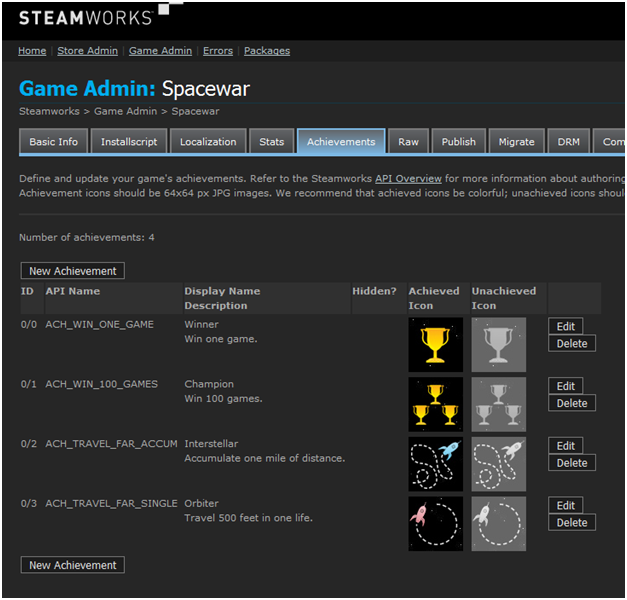 How to use them

Accessing Stats and Achievements from within your game:

This type of stat provides some unique and very useful functionality, but it requires a little bit more detail to explain.

Consider the case where you'd like to track an average statistic, such as "Points earned per hour". One approach would be to have two stats, an INT "TotalPoints" and a FLOAT "TotalPlayTimeHours", and then divide points by time to get Points per Hour.

The AVGRATE stat type lets you implement a "sliding window" effect on the average. For instance, you can utilize only the previous few hours of gameplay, so the statistic will more accurately reflect the player's current skill level.

Let's set up an AVGRATE stat to implement "points per hour" where only the previous 20 hours of gameplay affect the value. To do this, you would:
In the above example, Steam will take the current rounds average of 342.2 points per hour ( 77 divided by 0.225 ) and blend it with the previous value. The result will reflect the total average over the player's last 20 hours of game time. If this were the first time the stat was updated for the current user, the current value would be 342.2.

This example uses "hours" as the time unit, but you may use whatever time unit you wish. Just keep in mind that you must consistently use that unit as your base for "dSessionLength", as well as the Window property.

Getting stats for other users

Steam keeps a local cache of the stats and achievement data so that the APIs can be used as normal in offline mode. Any stats unable to be committed are saved for the next time the user is online. In the event that there have been modifications on more than one machine, Steam will automatically merge achievements and choose the set of stats that has had more progress. Because Steam keeps a local cache of stats data it is not necessary for the game to also keep a local cache of the data on disk. Such caches often come in conflict, and when they do it looks to users as if their progress has been reverted, which is a frustrating experience.

Stats and achievements that are settable by game servers cannot be set by clients. Game servers can only set stats and achievements for users currently playing on the server. If the user leaves the server there is a short grace period to set any final stats, but then any new uploads will be denied. This is to help ensure consistency and to avoid making it possible for a malicious game server to set anyone's stats at any time. Given the restriction, it is important not to wait until the end of a round to set stats. Set them continuously so you can store them as a user quits.

Clients will get automatic updates when a game server changes their stats. However, like clients, stats loaded by the server for other users are not refreshed automatically and can age out.

It's a best practice to think about how related stats could become inconsistent. For instance, you may have three stats "GamesWon", "GamesLost", and "GamesPlayed". Despite the best of intentions, stats can and do get out of sync with each other. In this case, that could lead to games won and lost not adding up to the total of games played. If this was resolved by removing the "GamesLost" stat and instead computing it as "GamesPlayed" - "GamesWon", an inconsistency could cause "GamesLost" to be negative. In this case, it's best to drop the "GamesPlayed" stat and compute it as "GamesWon" + "GamesLost".

Stats can be marked as aggregated on the admin page to tell Steam to keep a global total of all users' values for the stat. This can be used to get data on total money in the economy, total kills, favorite weapons, favorite maps, and which team tends to do better. On the flip side, this should not be used for stats like "MostKills" as adding that up for multiple users would be meaningless. As stats are in the hands of users, this data is subject to being manipulated. Therefore it's crucial when using aggregated stats to set good bounds for min value, max value, increment only (if appropriate), and max change. Max change has a special meaning for aggregated stats. When a new value is uploaded, the global value will change no more than the max change value. This limits how quickly a cheater can influence the global totals.

To clear an achievement or stats without adding code to your game, you can use the Steam client console. Run with steam.exe -console, then:

After your game has been released then information about individual and global achievement progress will be displayed in the Steam Community. Each player will have a link from their Community profile that goes to a page showcasing what they have achieved, and which they have yet to unlock.
NOTE: Your achievements will not be shown until your app is somewhat visible to the community.
Each achievement is listed with the appropriate icon, and the name and description as set in the Steamworks control panel. If the achievement name and description have been localized into the language the user has selected, then they will display in that language.

There will also be a link from this page, and one from your game's main Steam page, to a set of global achievement statistics for your game. It displays the percentage of Steam players of the game that have achieved each one, ordered from most common to the rarest achievement. This is fun for players to see, and also a great resource for you as a developer: are your special challenges hard enough? Or maybe too hard? (this information is also available on the Sales and Activations Reports site).

Ask questions on the Stats and Achievements discussion board