Steam VR
See all
Back
News & Updates
Steamworks Blog Steam Blog Steam VR Blog Steam Deck Blog
Back
Resources
Steam VR Steam PC Café Program Steamworks Discussions
Steamworks Documentation
Radial Menus
Steamworks Documentation > Features > Steam Input > Radial Menus
A radial menu is an on-screen overlay of game actions, displayed as a ring of choices selectable with a controller. These are very similar to Touch Menus, except that instead of selecting a specific location on the touch surface, the player must aim the virtual pointer at the option they want and then select it to fire the action.

You can use these to e.g. switch weapons in a first-person shooter, toggle hotkeys in a real-time-strategy game or MMO, or any other use you can think of. Radial menus can be configured in many different ways in both behavior and appearance, and can be adorned with custom labels and icons (provided by either Valve, the developer, or the player).

Here's an example of radial menus used for quick spell selection in Defender's Quest: Valley of the Forgotten: 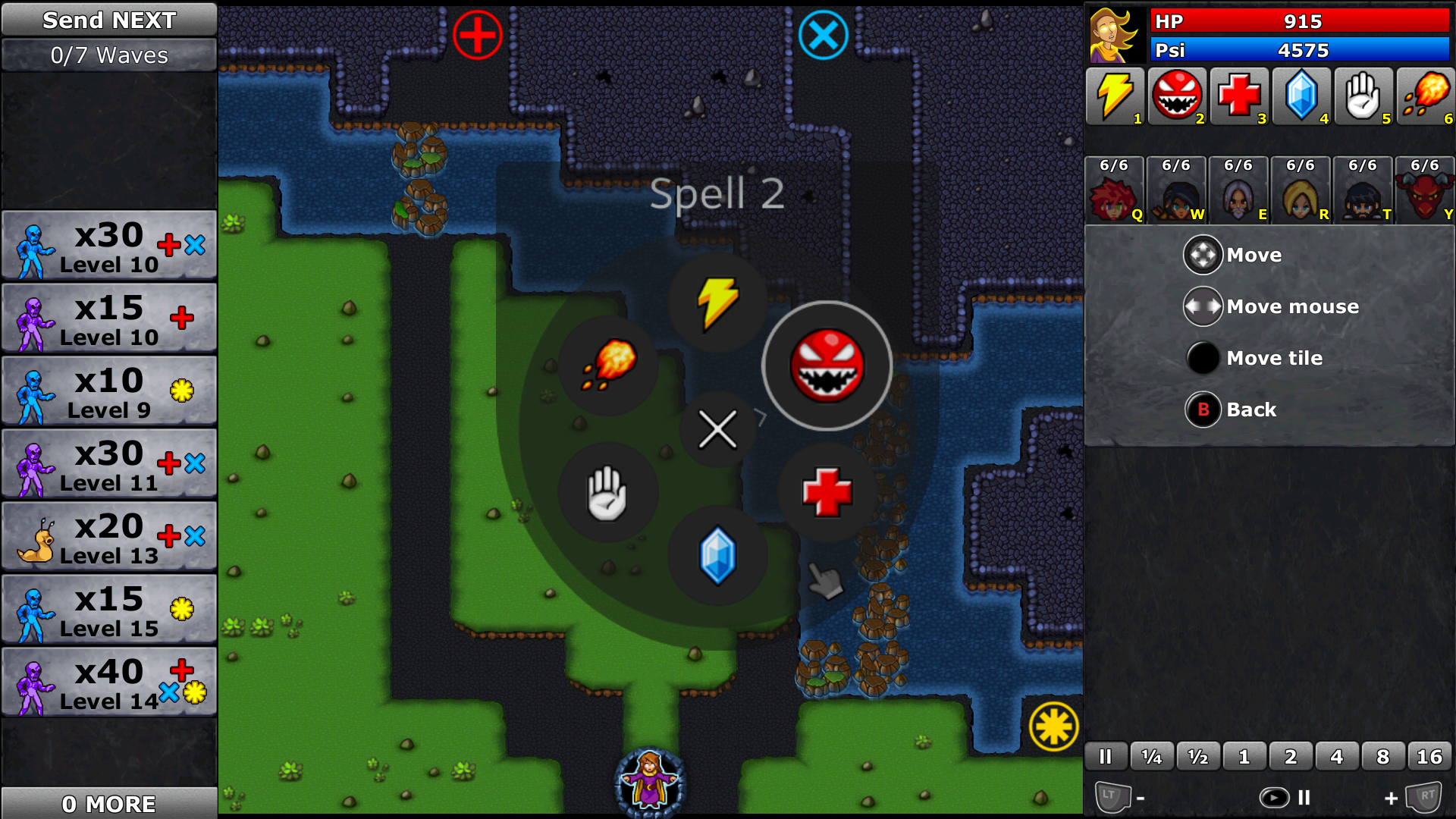 Radial menus are available in both native and legacy mode, but can only be driven by certain Input Sources:


To create a radial menu, simply select a compatible input source in your game's configuration (such as a joystick or trackpad), and select "Radial Menu" as the input style. 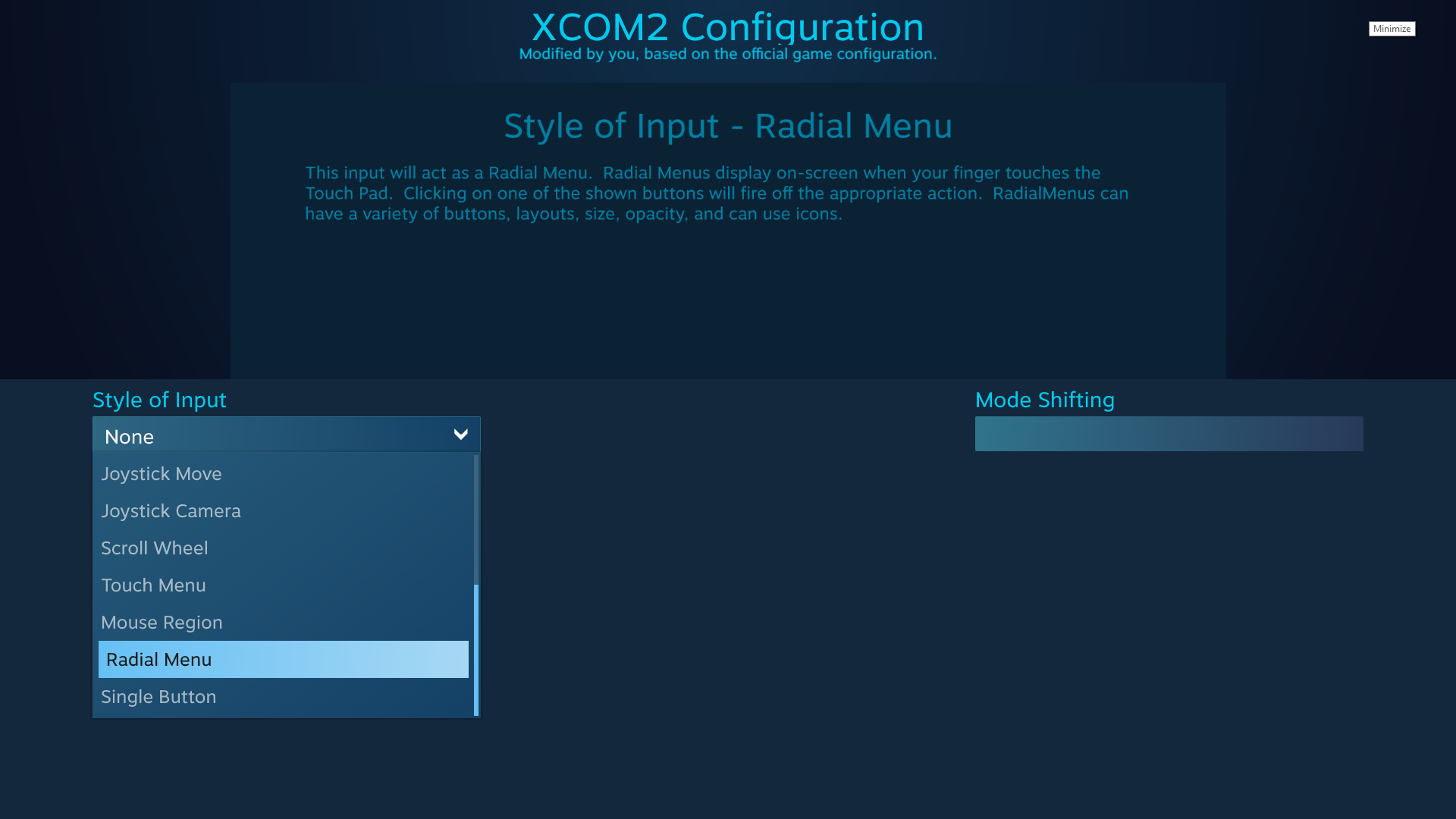 Here's what the radial menu configuration screen looks like: 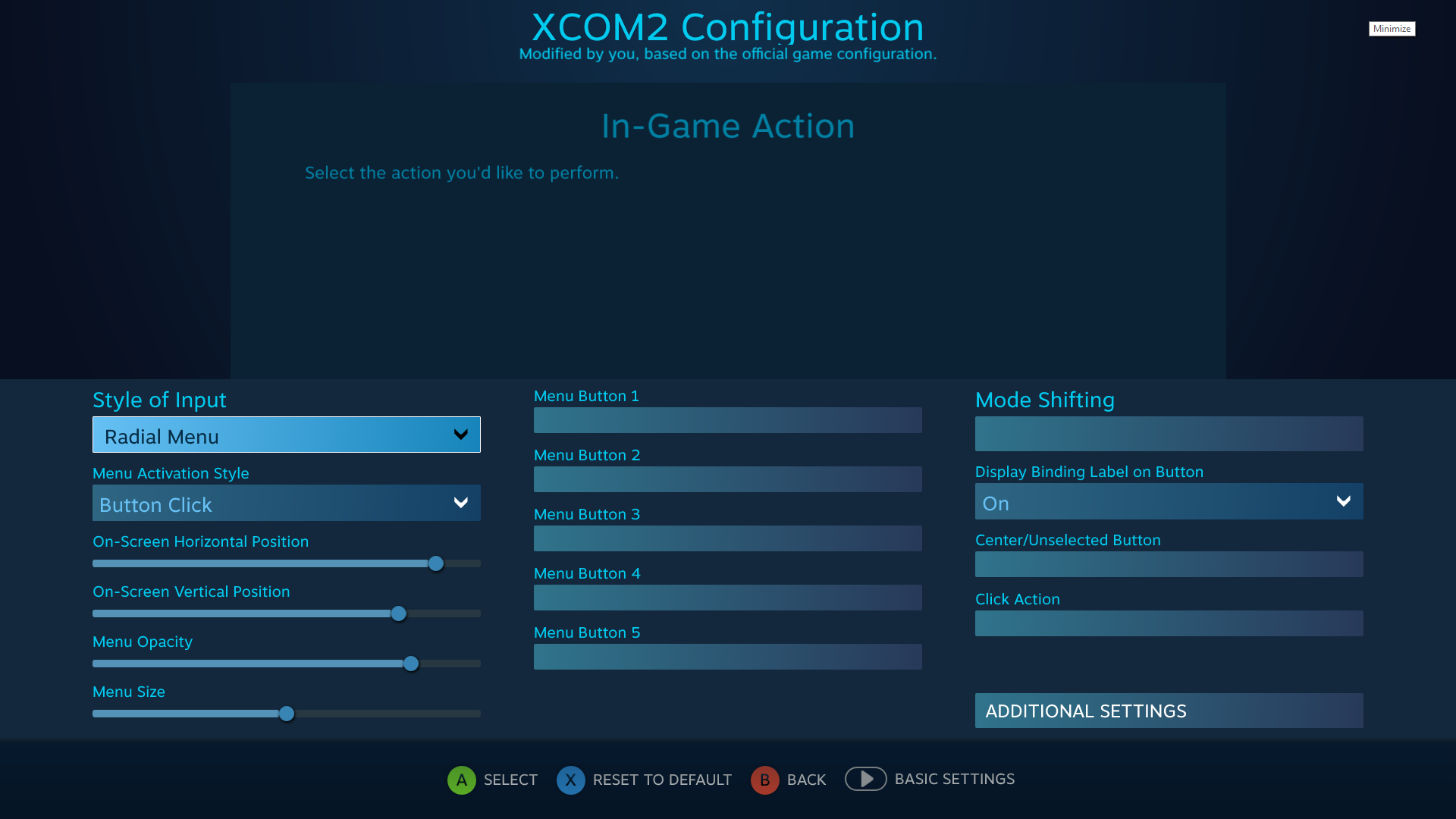 This determines how the radial menu works -- should the action fire when you point at it and let go, must you click something first, or should it continuously fire as long as it's highlighted?

The available options are:

Each "Menu Button X" option can have an action (and/or legacy key binding) assigned to it. The basic configuration screen has five menu buttons, but you can assign up to twenty (select "Additional Settings" for bindings for menu buttons 6-20).

There is also an optional "center" button in the center position of the radial menu that is bindable just like any other radial menu button. Note that this button will grow in size as you add more regular menu buttons.

Depending on your game, you might want the player to easily be able to back out of the radial menu without activating anything. If you are using the "Touch Release/Modeshift End" activation style, this can be tricky because whatever action you have selected last will immediately fire when you close the radial menu.

One particularly nice way to do this is to create a completely unused action in your game (call it "nevermind" or something), and bind it to the center button. Or, if you're the player and the developer hasn't provided such an action (or you're in legacy mode), bind the center button to some legacy key that the game ignores. Then, choose a nice "X" for this menu button.

Voila! Now whenever you want to dismiss this kind of radial menu without committing to an action, you just return to the central rest position and release the input.

For each menu button, you can also assign an icon. Select the box next to the word "Icon" to assign one:

When you select an icon, you may also change its colors:

By default the icons are provided by Valve from the Steam client itself. You can find these in <SteamInstallDirectory>\Steam\tenfoot\resource\images\library\controller\binding_icons (and if you add your own here, they will appear in this menu, though only on your own local computer). Developers can provide their own custom icons for use in radial menus (and touch menus) by placing *.png files in a directory named /TouchMenuIcons, relative to their game's root directory.

Here's an example of a developer shipping custom icons with their game:

Animated GIFs can be used as custom menu icons!

You can use Action Set Layers to created Nested Radial Menus. We'll provide an example using the game Slime Rancher.

And here's the finished IGA file for the configuration we'll be creating:
slime_rancher_nested_radial_menus.vdf

And here it is in action: 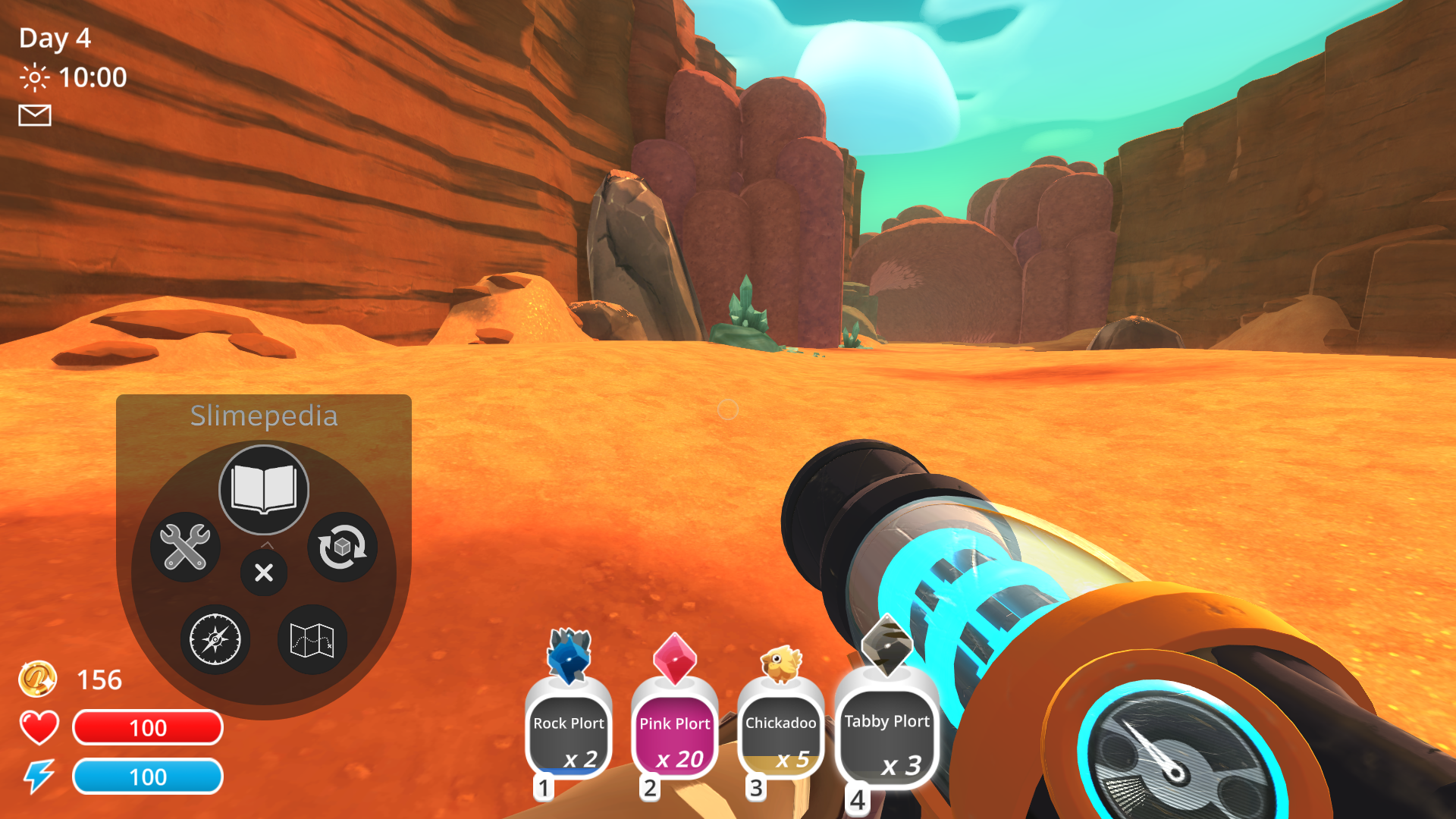 This radial menu is bound to the left trackpad, and lets you select various in-game options such as "Open the Slimepedia", "Toggle radar", "Open the map", etc. But it also has a special option for opening a nested radial menu, "System Options": 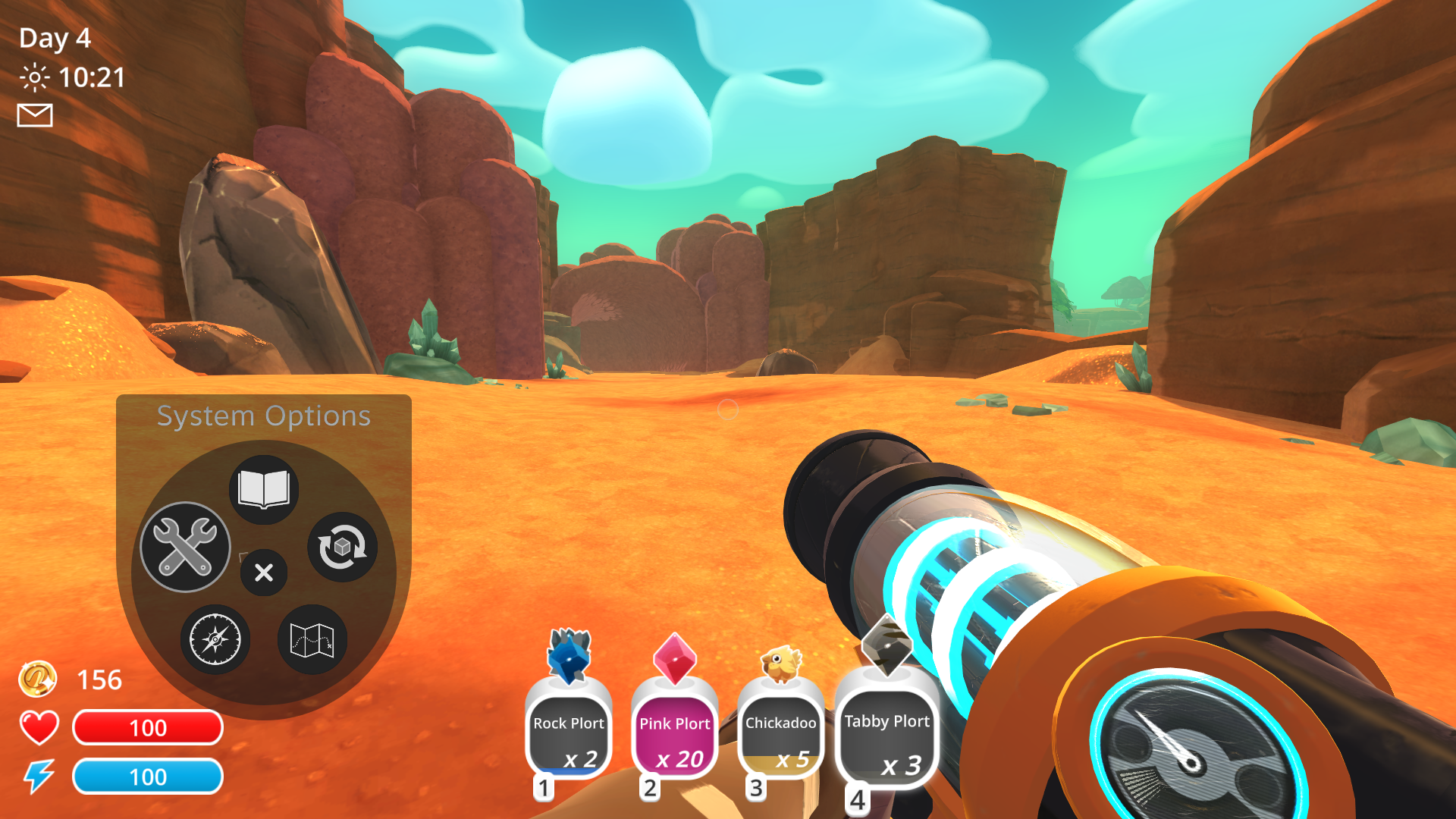 Selecting this will activate a player-defined "System Options" action set layer. The next time we open the radial menu, we will see this instead: 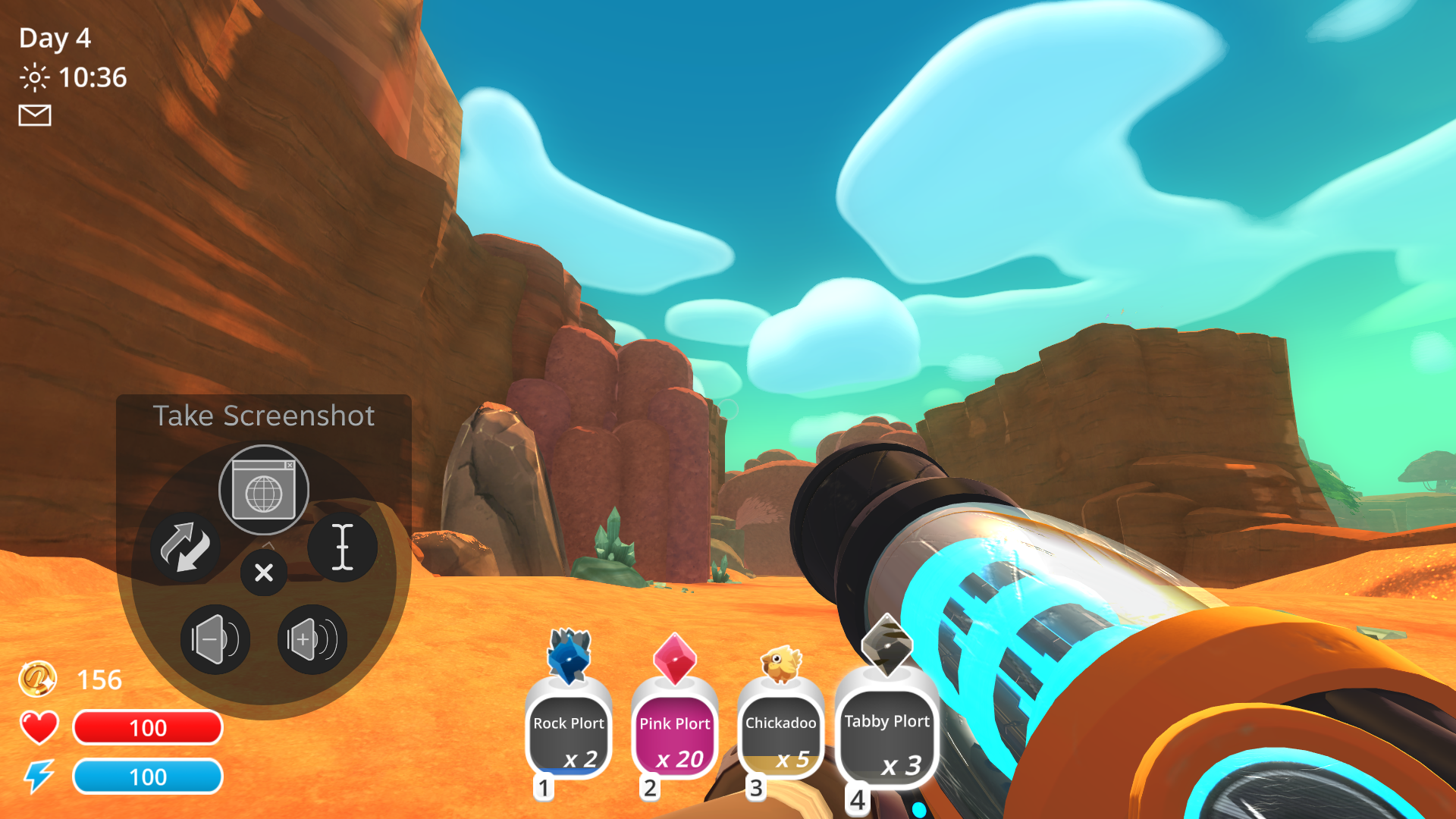 Now we have options such as "Take screenshot", "Show keyboard", and volume controls. There is also an option to "Return", which will deactivate the "System Options" action set layer and cause the normal options to appear the next time we activate this radial menu: 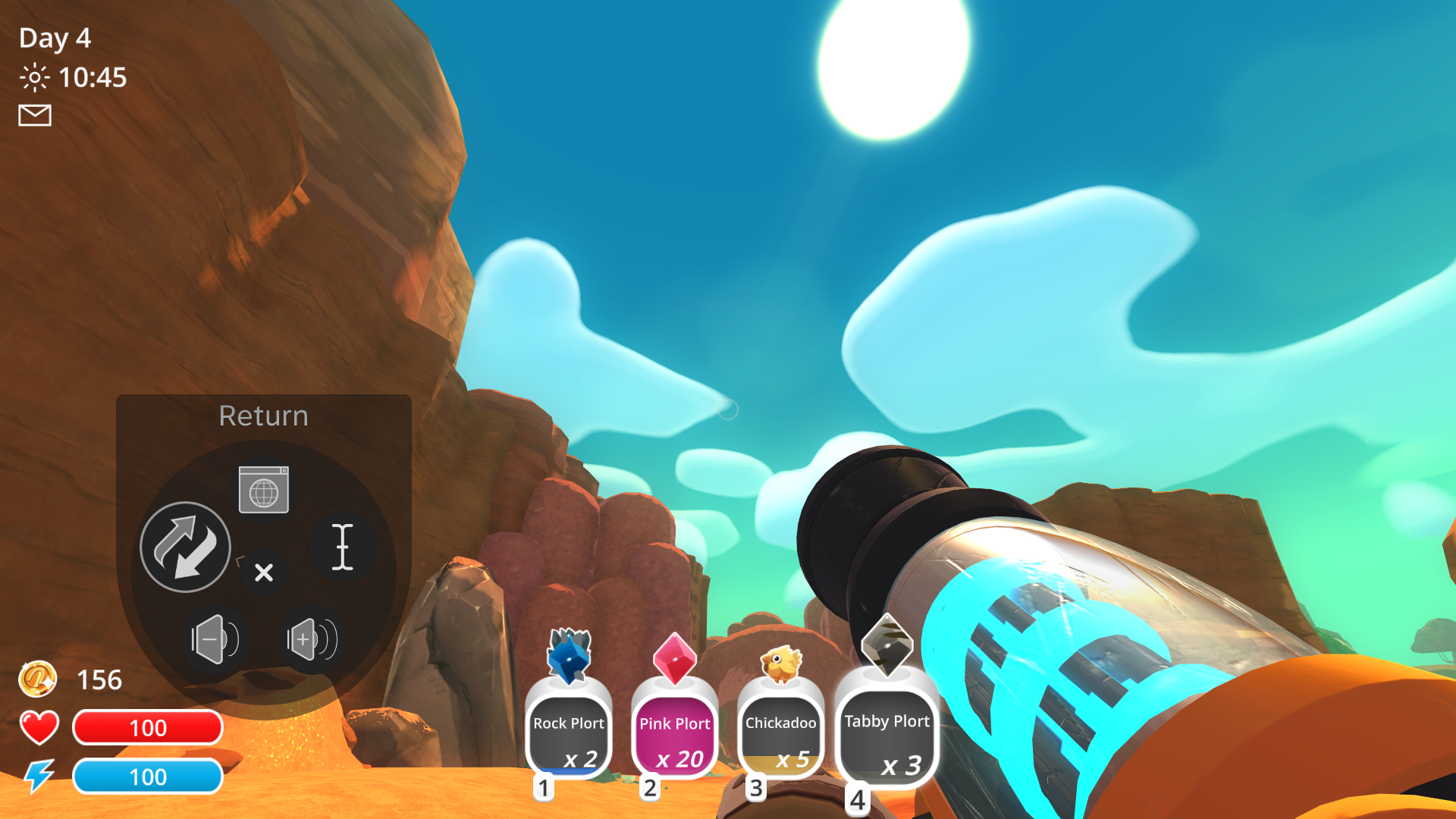 Here's how we set it up. First, we create a custom action set layer. We click "add action layer." 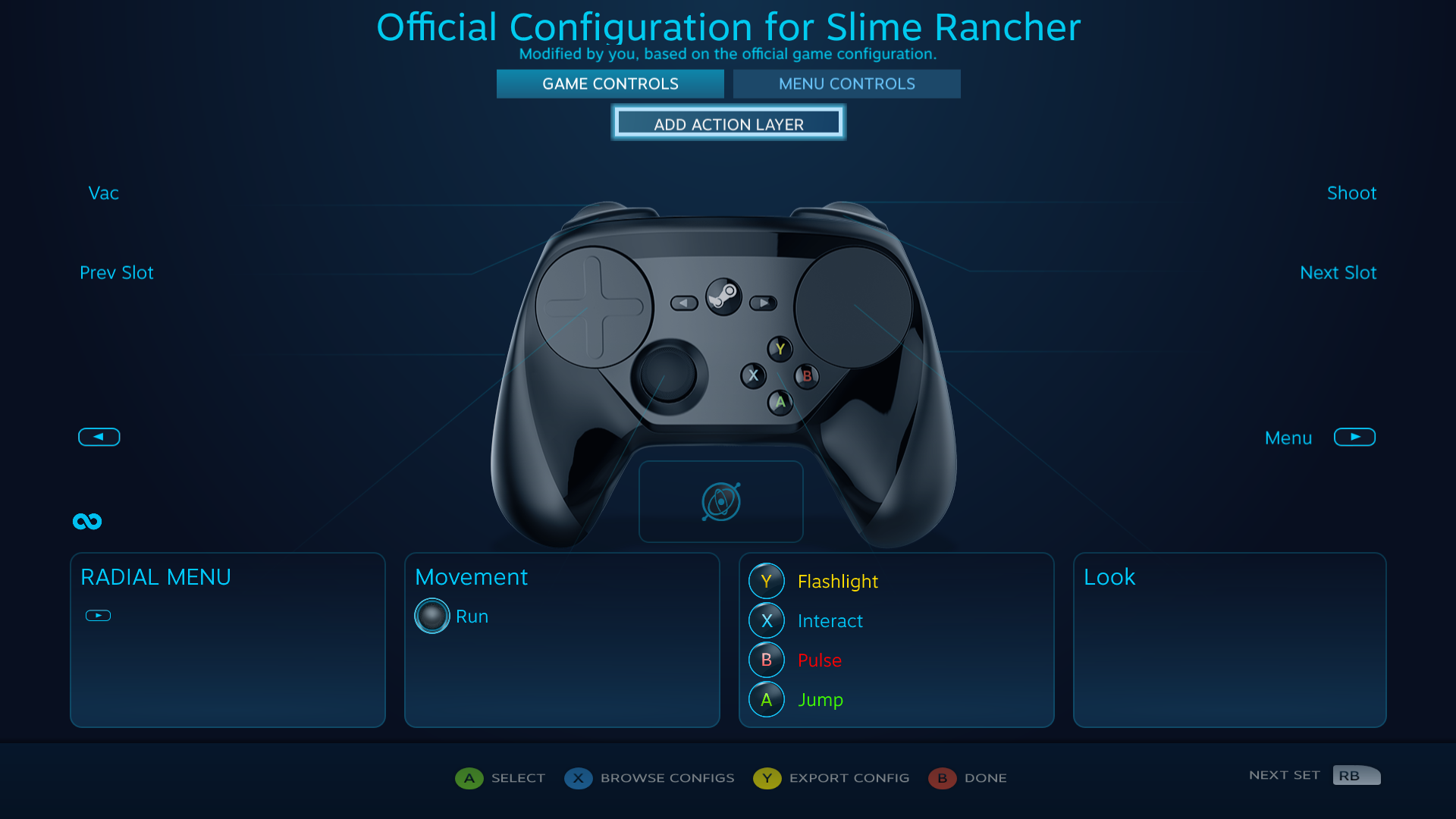 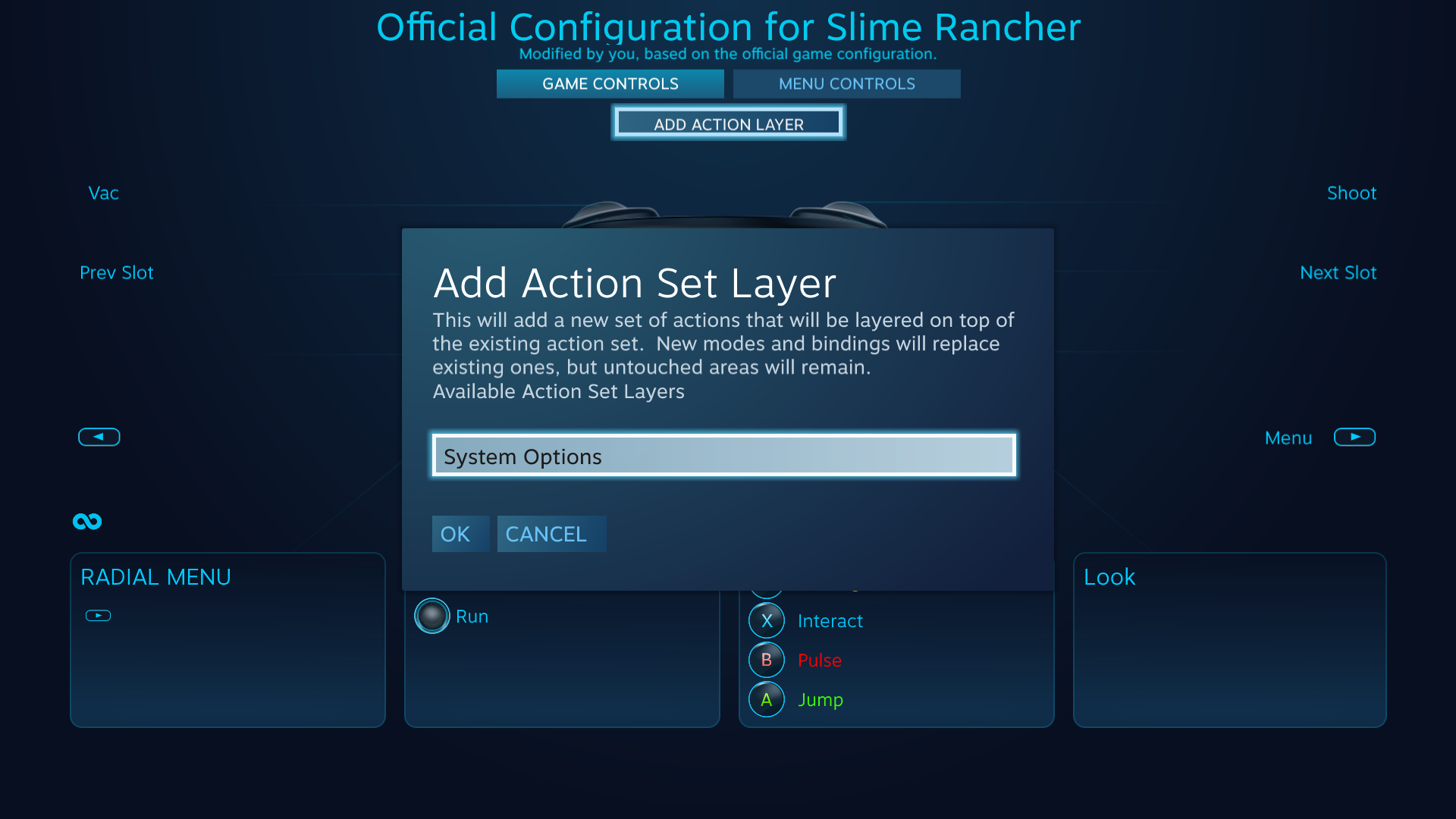 Now that that's done, we return to our base configuration and "game controls" action set, then select the left trackpad and configure our basic radial menu: 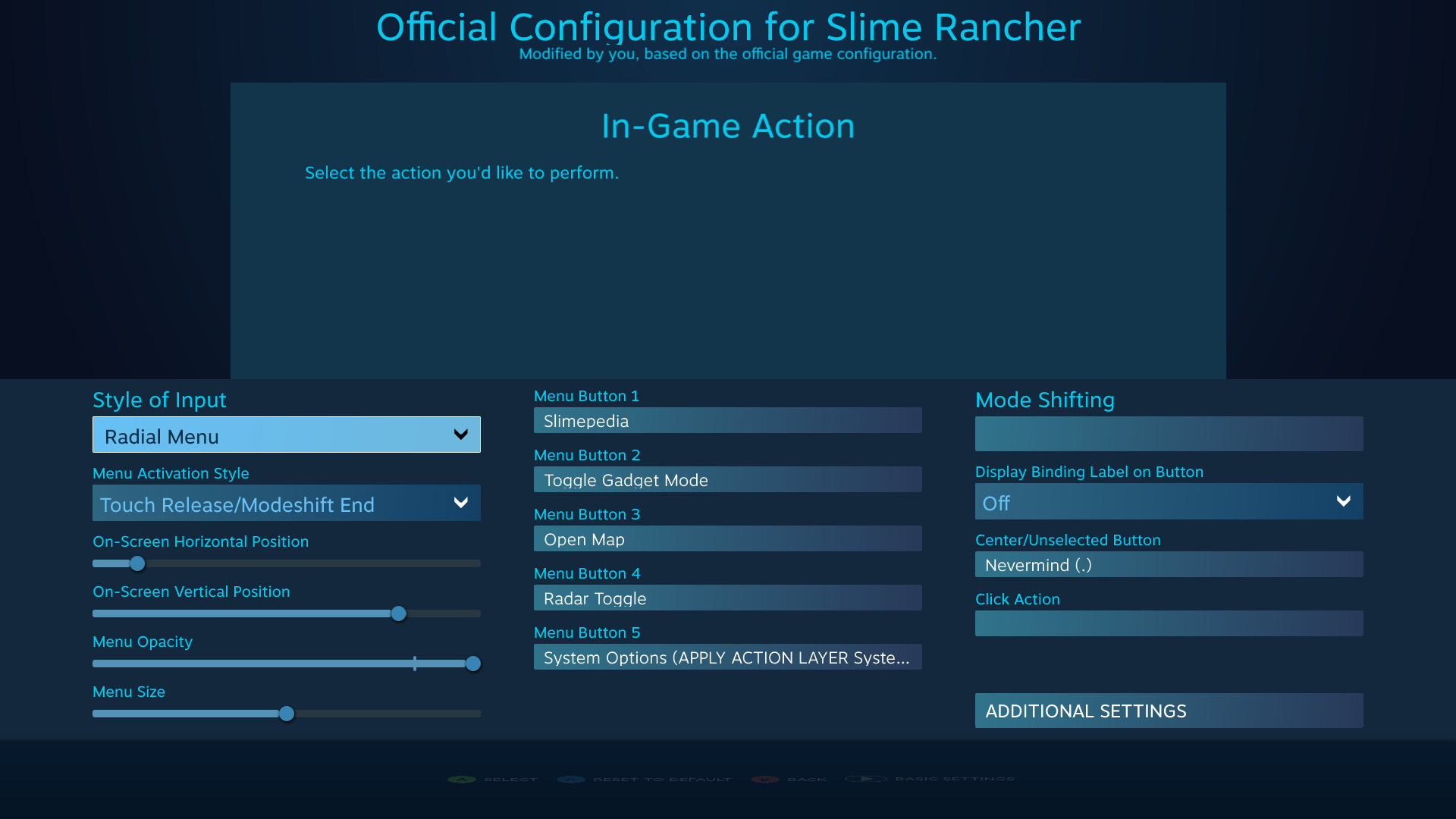 Everything is pretty normal except for Menu Button 5, which activates the action set layer. We set this by selecting the special "action set" button in the binding screen and selecting "Apply Action layer --> System Options" from the pop up menu: 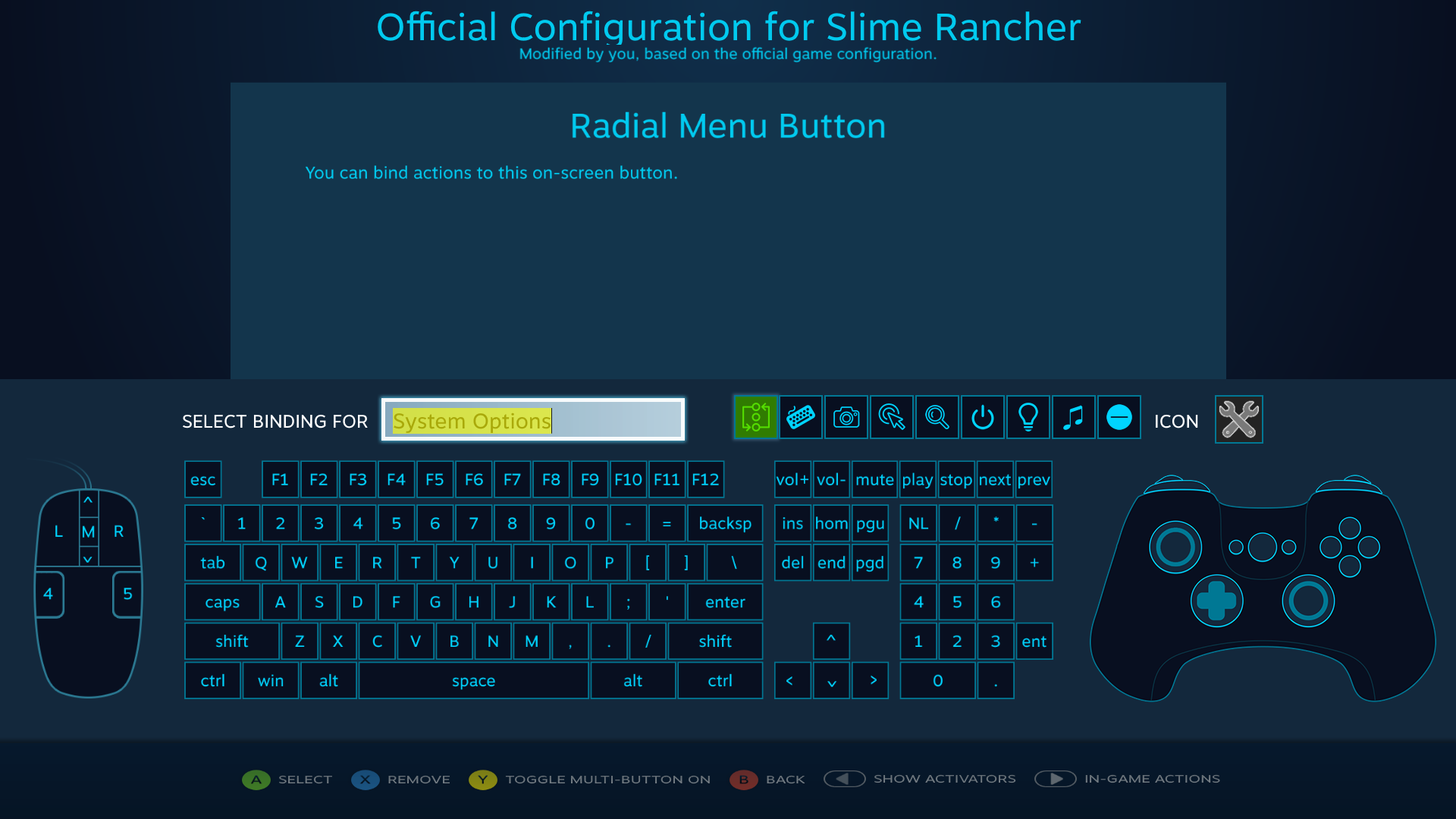 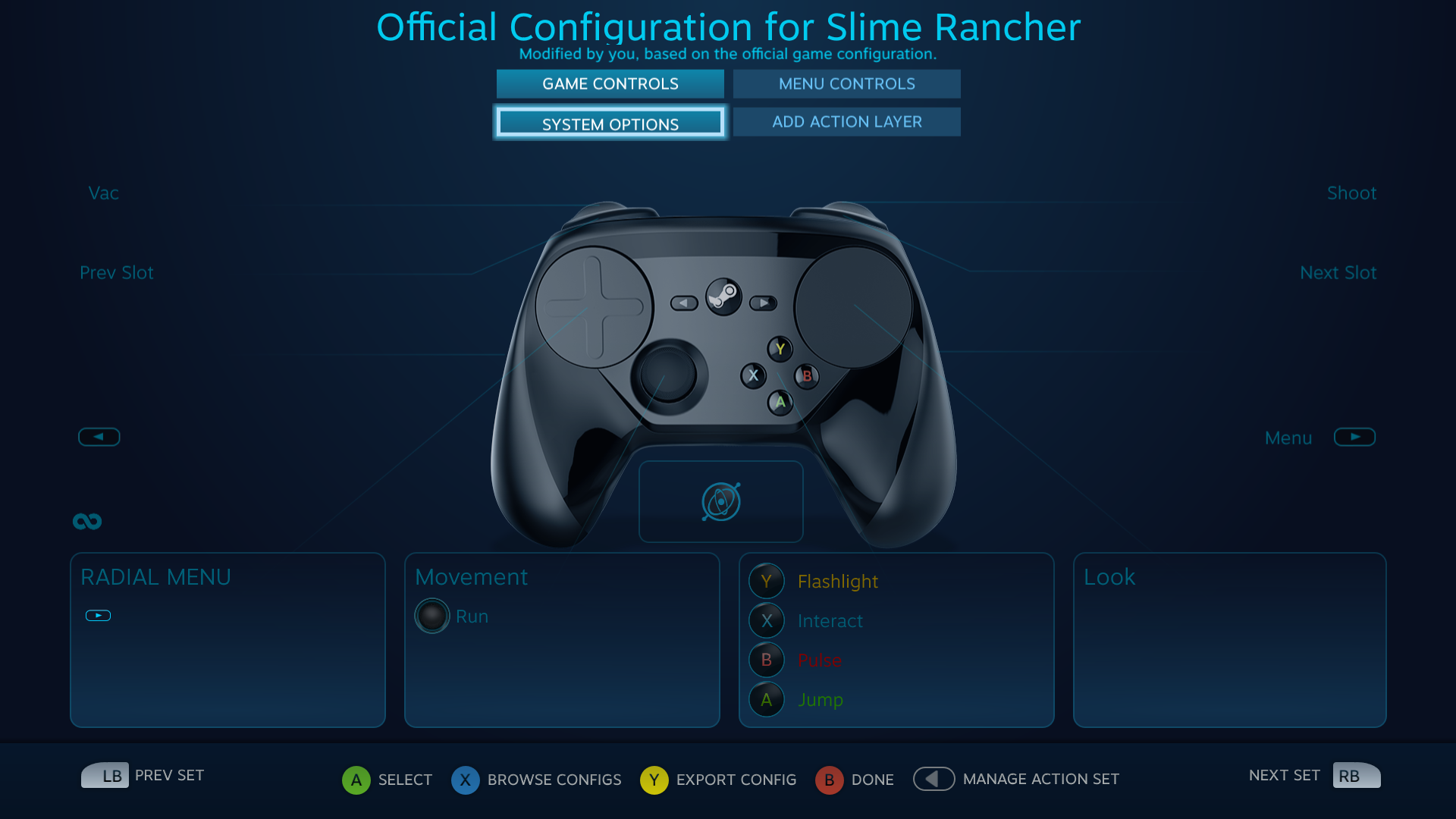 Then we select the left trackpad where the radial menu is bound in the underlying action set: 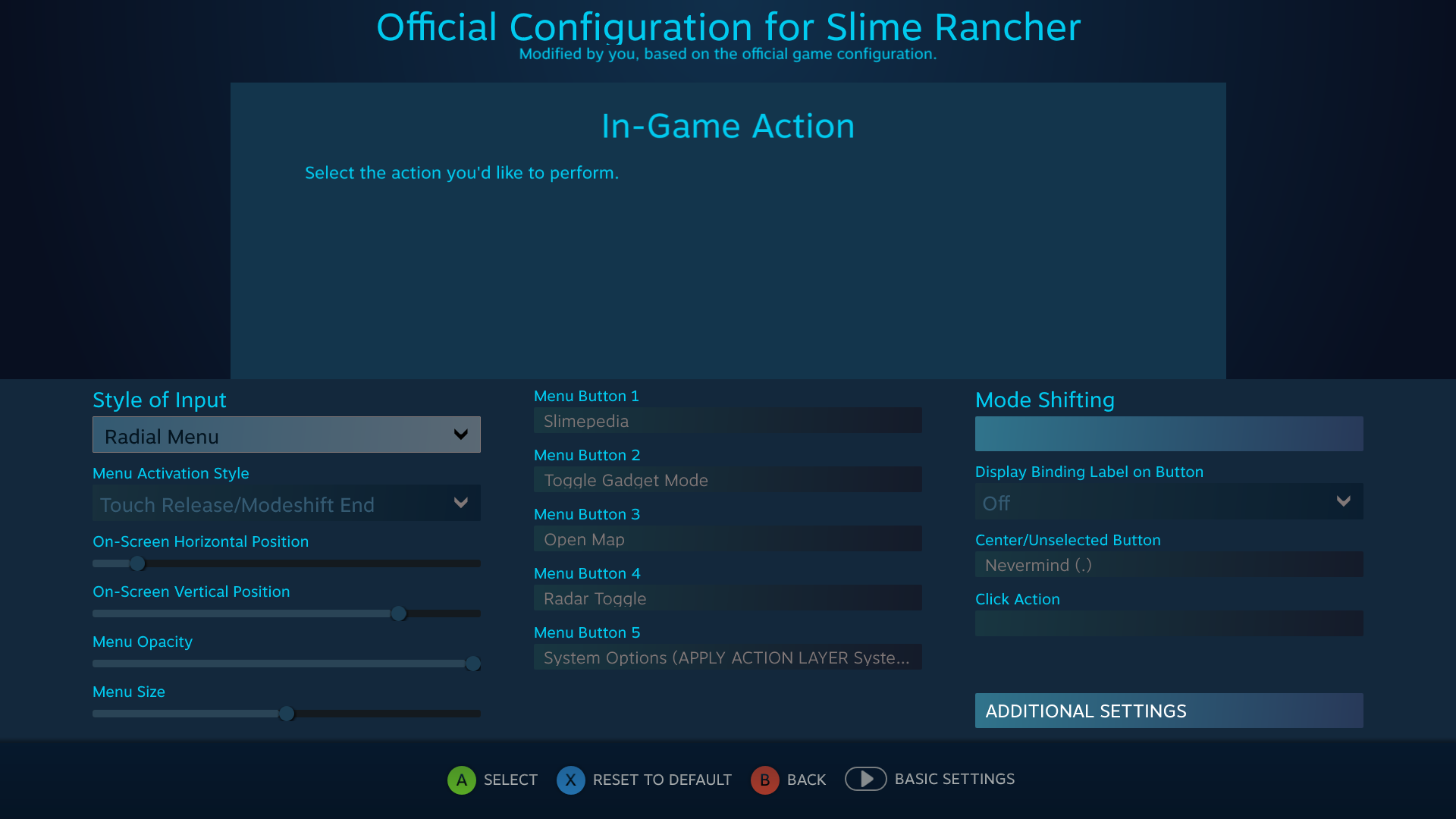 Note how we can see the underyling action bindings in grey. We can override them here to create a nested radial menu. Any actions we do not change will "show through" in the second layer radial menu. We're going to override all of them here with various system option bindings (except for the central "nevermind" action). Note especially that we bind an action set layer command to the fifth menu button, which deactivates the action set layer: 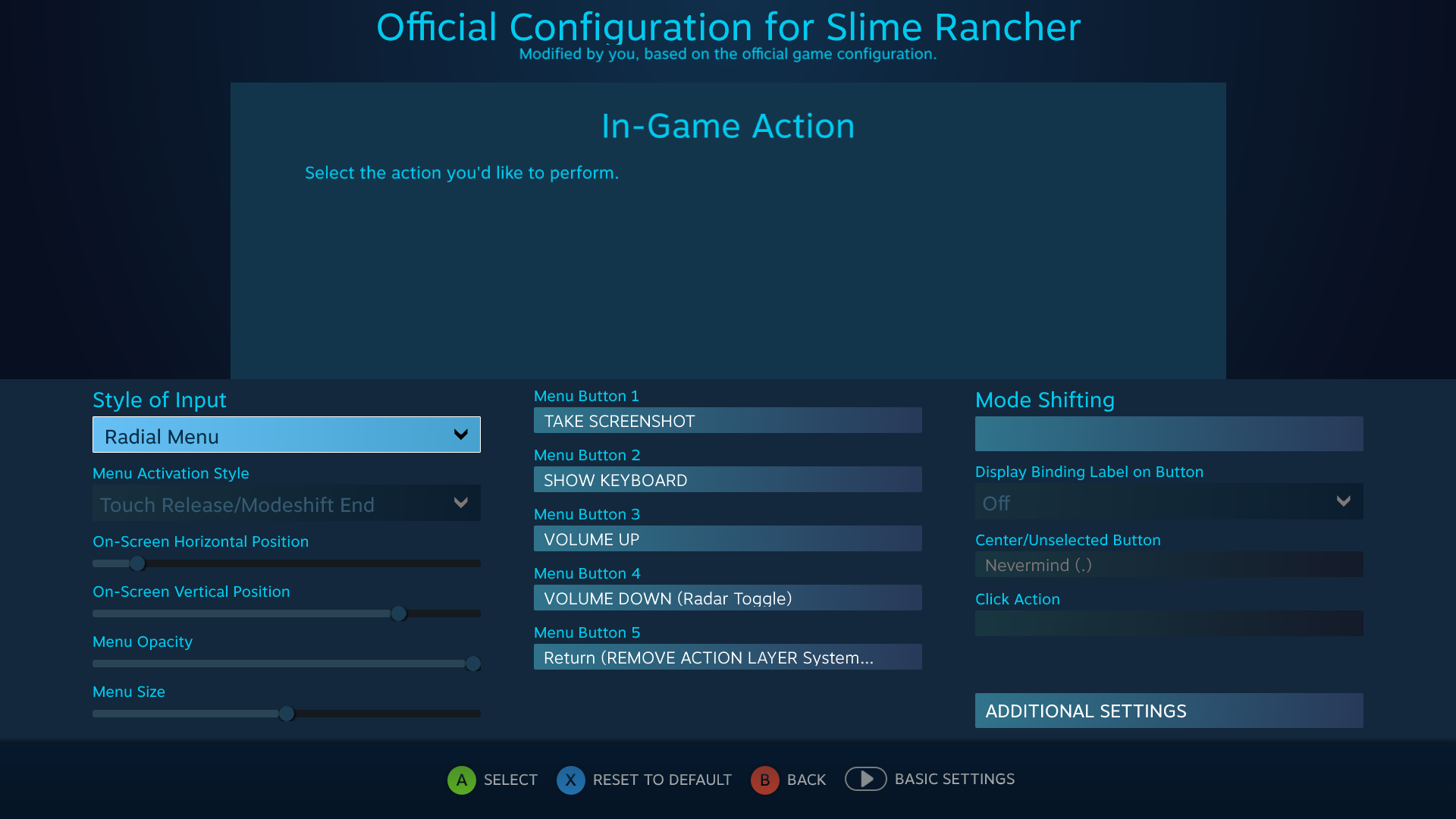 And there you have it! A double-layered radial menu.

And the IGA file:
slime_rancher_nested_radial_menus.vdf