Example: Repeat "Down" on Hold

Have you ever played, say, a menu-driven RPG and gotten frustrated that you had to repeatedly push "down" to scroll through a list of hundreds of items, one at a time?

Activators let you define simple macros like, "If I hold DOWN for 1 second, repeat DOWN every 0.1 seconds thereafter until release." Ta-da! Now you can scroll through that list in a jiffy just by holding down the button, even though the developers never implemented it!

So here we are in the configuration menu for said hypothetical RPG -- the Dpad is already properly bound, but we want to add an activator to the "Dpad Down" input: 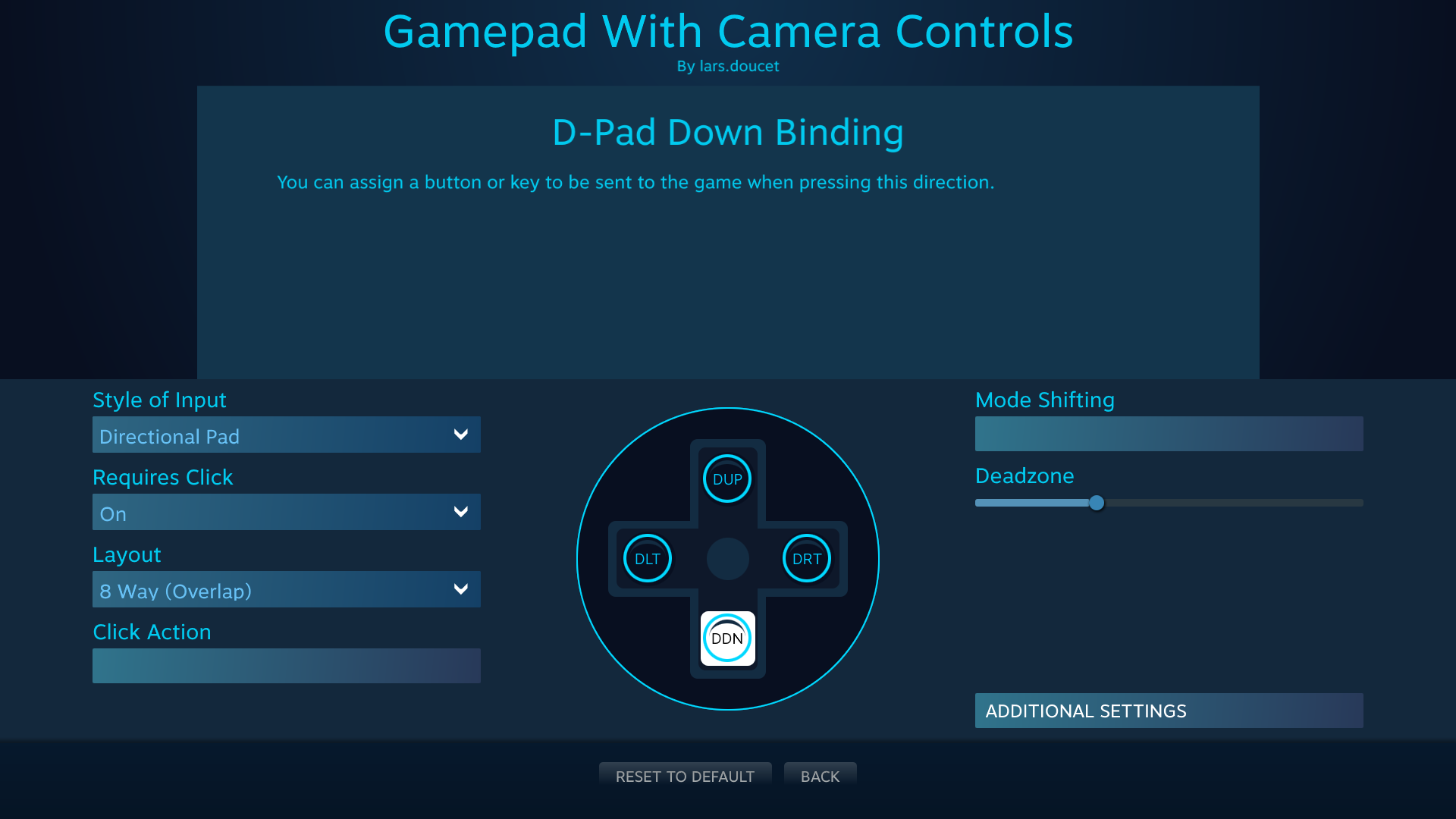 Selecting that, we see this menu, and select "Show Activators." 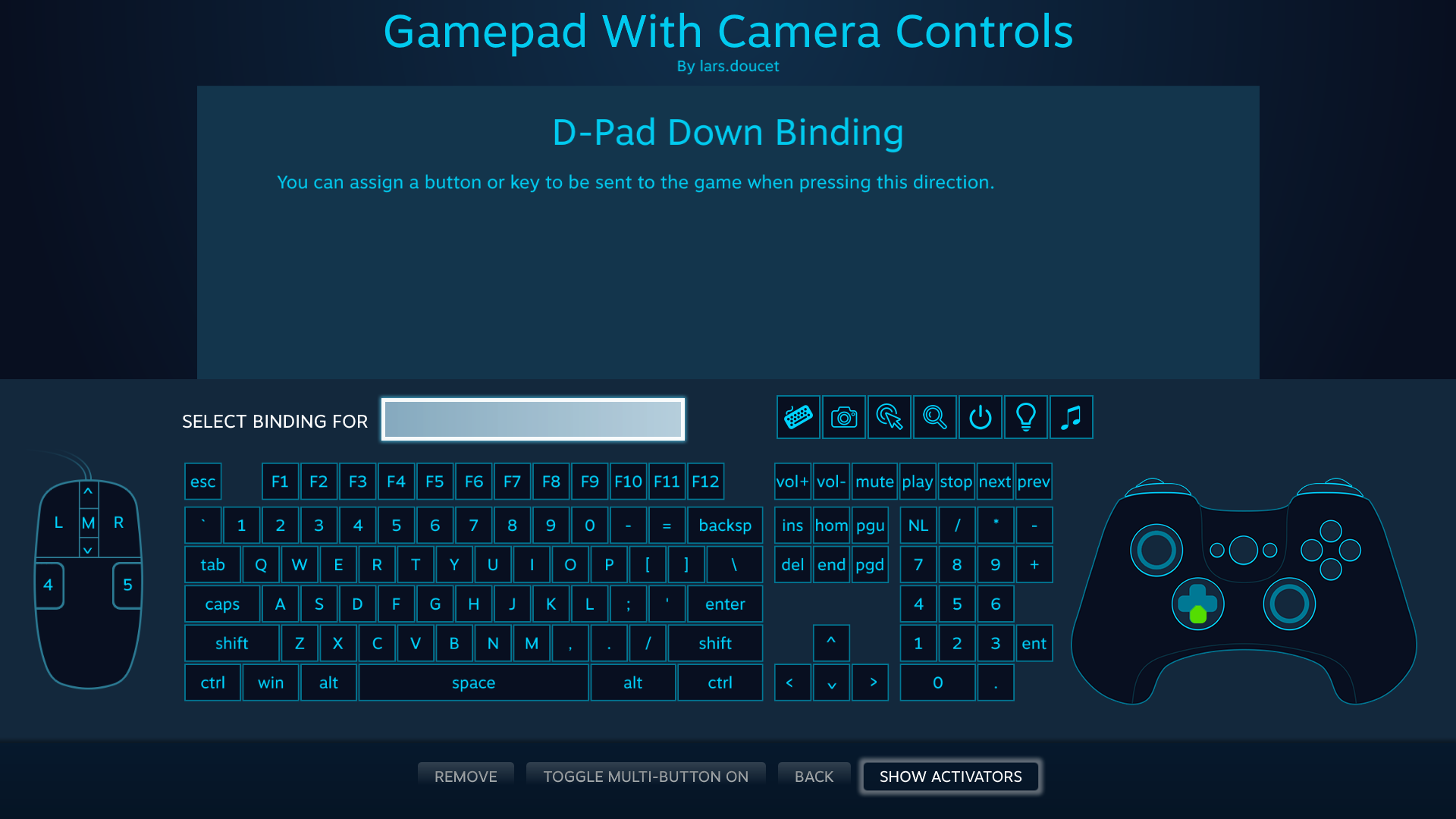 From here we are taken to the activators menu and have a variety of settings at our disposal: 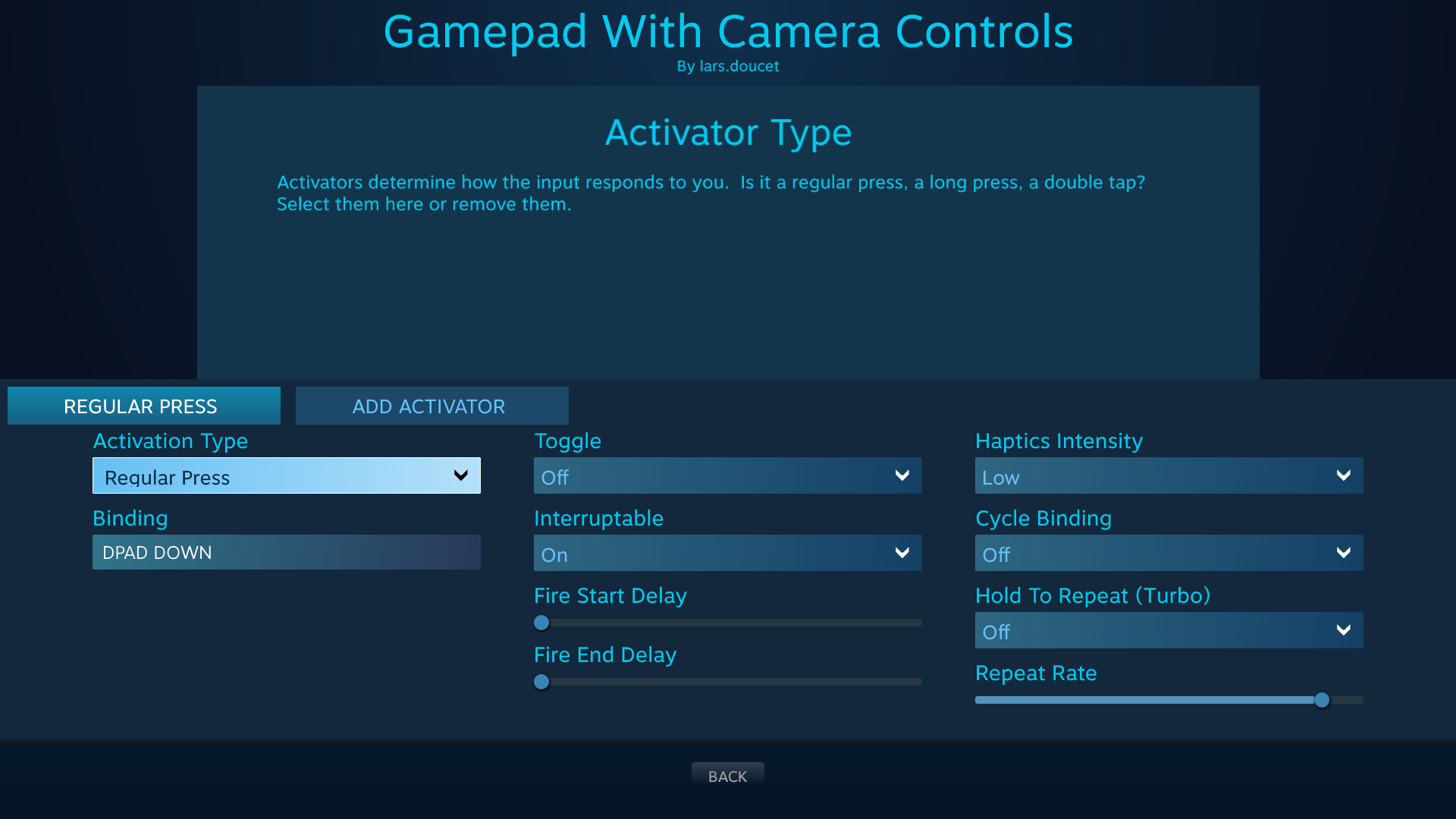 So first thing's first -- let's select "Long Press" as our activation type. This is what will trigger the special behavior. 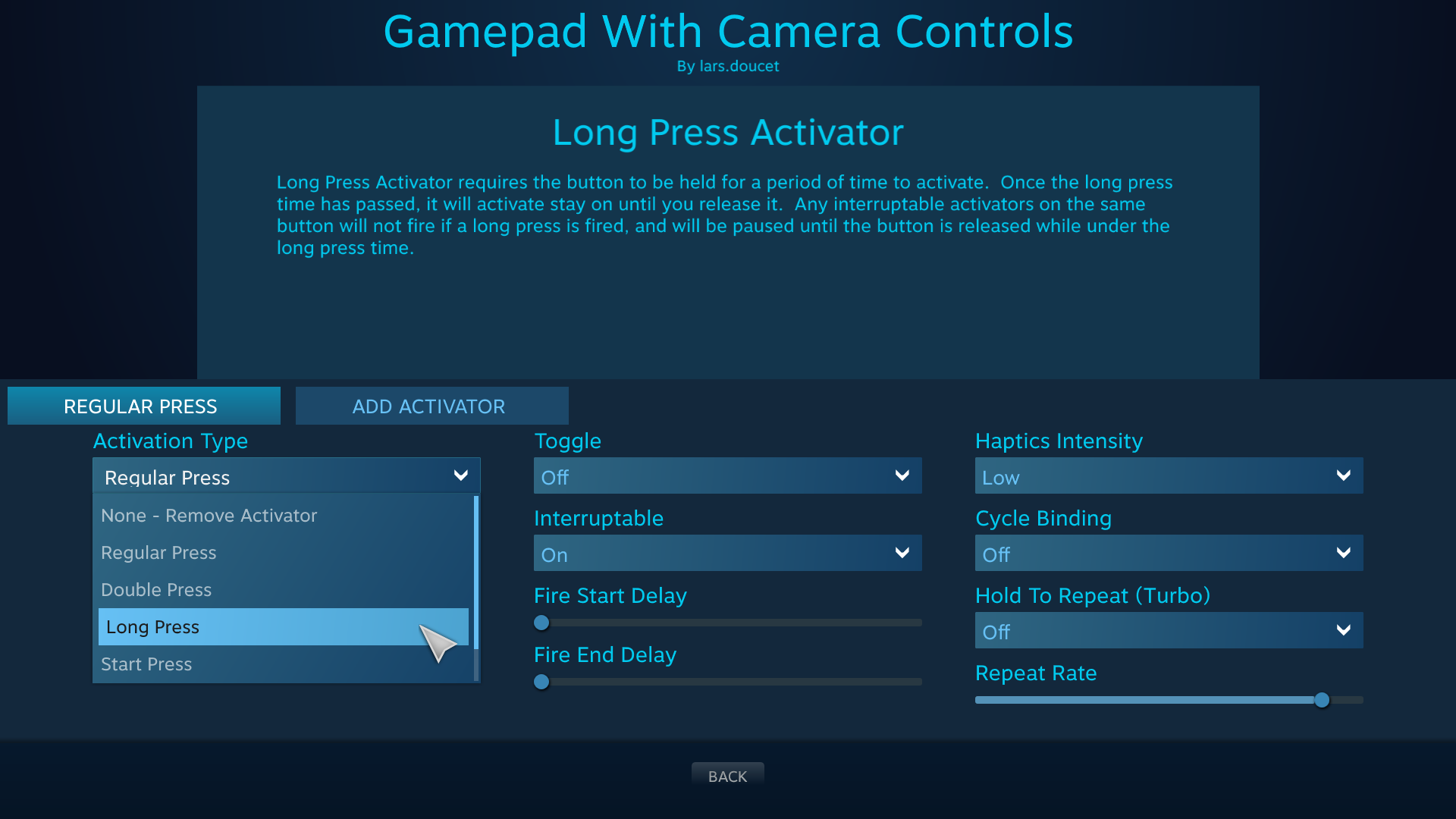 By default, the activator's binding is set to the original input (Dpad Down), which we'll leave because that's what we want. We'll also leave "Long Press Time" on the default value, 0.15 seconds. 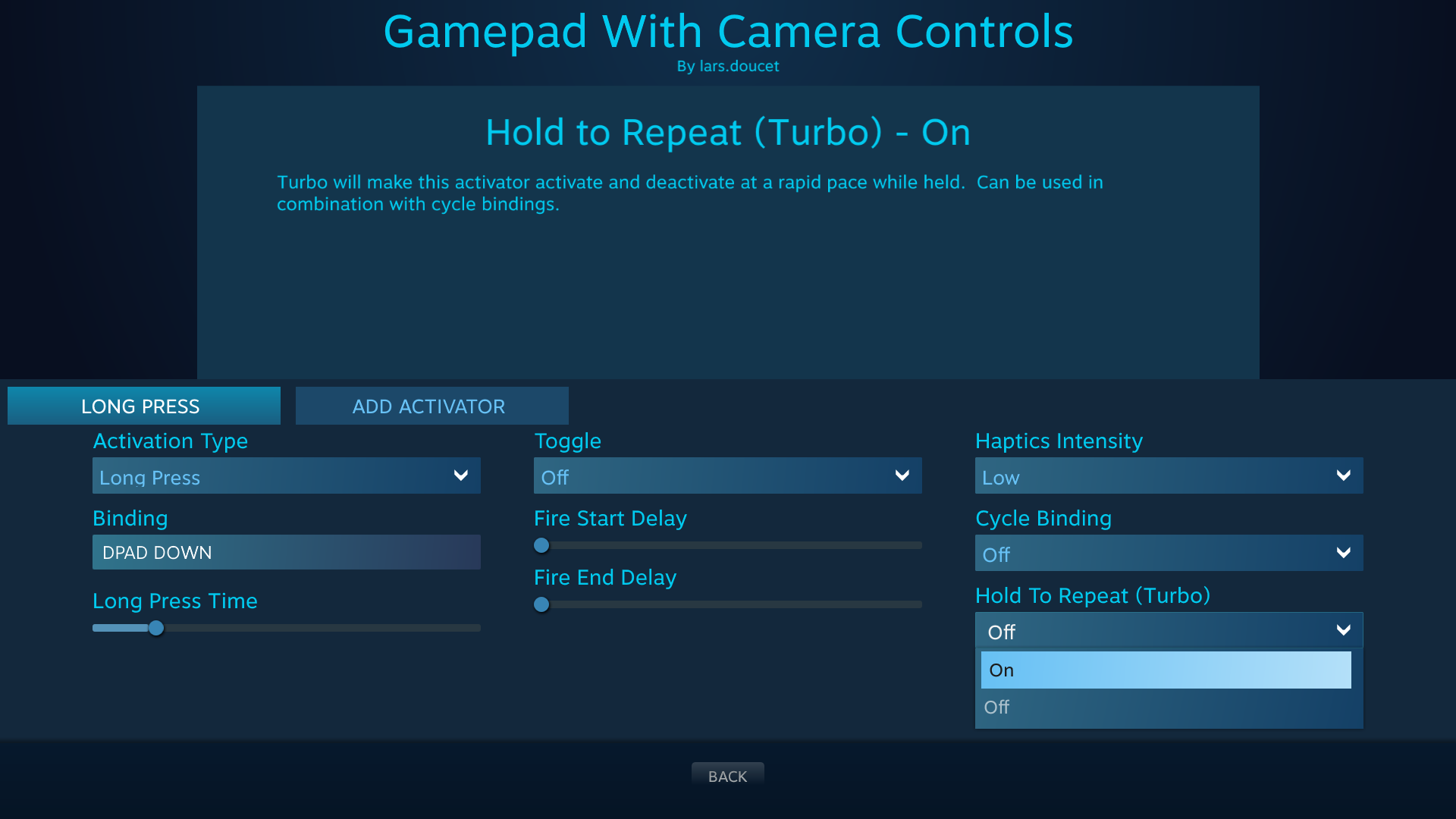 We'll leave the "Repeat Rate" at it's default value, 0.9 seconds. Now, whenever Dpad down is pressed and held for longer than 0.15 seconds, every 0.9 seconds therafter it will pulse an additional Dpad down event until the input is released. These timings can of course be adjusted to taste.

If you want to add several different activators, you can do that by selecting "Add Activator." You can remove an activator by selecting "None - Remove Activator" as the activation type. There doesn't seem to be a limit to how many activators you can add, but any more than five will start to run off of the interface.

Let's break down all the settings available in the activator system. These settings are always available regardless of activation type:


Here's a description of the various activation types:


These settings are specific to certain activation types: