In order to help developers understand the usage of the Steamworks API we have included source code for a fully functional version of the classic Spacewar! multi-player shooter game. It is a simple 2D game with support for up to 4 players and provides a perfect opportunity to showcase many of the APIs available in the Steamworks SDK.

As you look through the code keep in mind that our goal was to write a simple, stripped-down game so we could showcase the Steamworks API as clearly as possible. You won't find any magnificent new graphics tech here; instead we hope you'll find clear examples of how deeply to integrate Steamworks functionality into your own projects.

The APIs and Steamworks features demonstrated in the example code include: 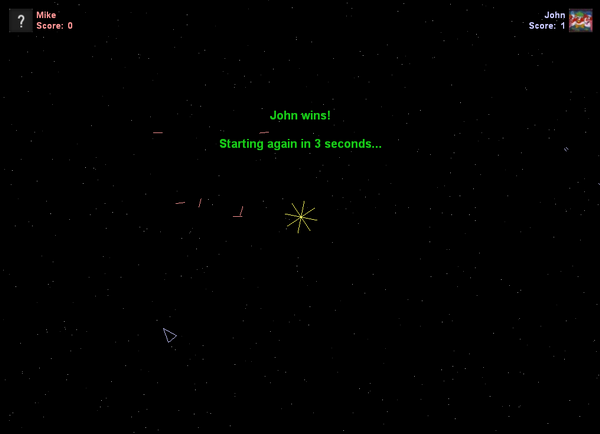 Once you have downloaded and extracted the Steamworks SDK package, find the sub-directory named SteamworksExample. Inside of this directory you'll find SteamworksExample.sln, which can be opened in Visual Studio. Open the solution and compile the project. If compilation succeeds then you're ready to go and can run the project directly from Visual Studio (you'll need to have Steam running in the background). If the build or execution fails try one of the tips below.

Once you have the Spacewar! example project compiling and running you'll want to start looking at the code. If you browse the files within the Visual Studio solution explorer you'll see that the code has been broken up into Game and Engine code. You can ignore the code in the Engine folder - it supports basic 2D rendering via D3D and basic keyboard input. All of the important code documenting Steamworks API usage is files in the Game folder.

The most interesting areas to begin looking at the code are described briefly below:

If your game has an existing authentication and matchmaking engine that you will keep using then you may want to remove the USE_GS_AUTH_API define from Spacewars.h. When you remove this define it will cause the sample to NOT use Steam authentication or matchmaking but you will still be able to access other Steam functionality such as achievements and friends information, look at the code for details.