Steam VR
See all
Back
News & Updates
Steamworks Blog Steam Blog Steam VR Blog
Back
Resources
Steam VR Steam PC Café Program Steamworks Discussions
Steamworks Documentation
Steam Economy Context IDs
Steamworks Documentation > Features > Steam Inventory Service > Steam Economy > Steam Economy Context IDs
Each asset in the Steam Economy can be uniquely identified by the combination of three numbers: App ID, Context ID, and Asset ID. It is up to each game to determine what the 64-bit context ID means for its assets. Depending on the style of game this will probably take one of a few different forms. In any case, Steam doesn't care what the values of a context ID actually are. The only requirement is that stay the same for the same logical context (server, character, container, etc.) so that audit records will continue to be accurate and so GetAssetDetails will continue to work for those assets.

All contexts defined by the asset server must also have a non-zero context ID. APIs that return context IDs must not specify a value of zero.

Some games have a single inventory per user and no concept of a persistent character that is distinct from the user's account. Those games may only have one context per account to represent all items owned by that account. They may also declare some contexts that contain other types of assets or contexts that aren't user-visible at all just to expose some internal data in the support tool. 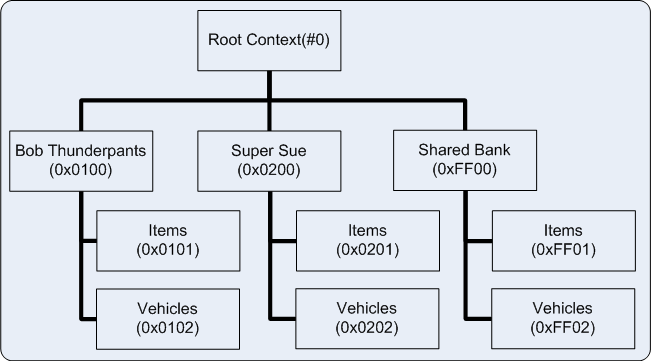 Characters on a Shard

Some games have characters that are tied to a specific server and then multiple inventories per character. This pattern is common in MMOs. One way to partition context IDs for this sort of setup would be to use the high 16 bits (with two reserved) for server ID, 32 bits for character ID, and 16 bits for container ID. (Zeros omitted from the diagram for the sake of brevity.) 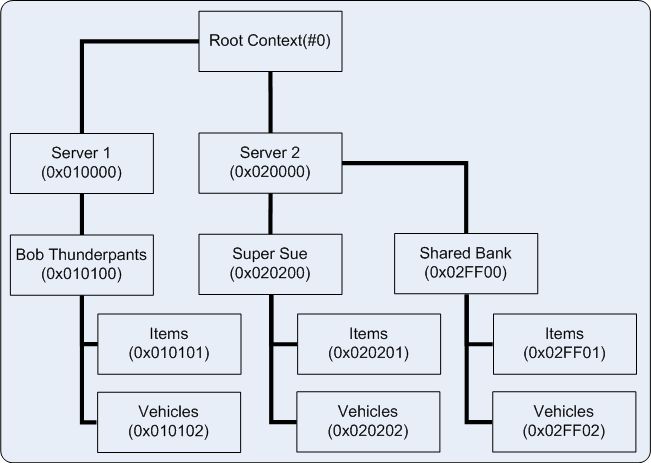