TV Series, Episodic and Tutorial content on Steam provides a unique opportunity to sell content to a worldwide audience who are deeply engaged in the ecosystem that is Steam. You can sell your content at a Series level, at a Season level (purchase all at once or Complete My Season), individual episodes or even bundles with games or software. Series support also allows for free content, whether the whole series or just a couple of episodes as an introduction. Series receive the same level of promotion an individual film or other standalone piece of content receives on Steam including major sales, weekend and daily deals, etc. Customers can wish list and follow a Series, earn trading cards, show off their interest on their profile and talk about the content on discussion forums. Just about everything a game can do on Steam, a Series can do too.

Below are step-by-step instructions for bringing your episodic content to Steam as well as more details about how this new content type on Steam works. If you have any other questions, please post in the developer discussion forum and we'll be happy to share more!

Submit a ticket and provide a description of the video content you'd like to distribute and a new video series app will be created for you.

The Series App represents the Store Page that will be on the Steam Store, the Community Hub, what Steam users see on their profile, the product they can wish list, etc. All actions whether buying an season, watching a single episode, etc., are rolled up and attributed to the Series. The Series app is also the place you will go to create and manage the Seasons and Episodes, the Series package, the Season Bundles, etc. It is also the place where you must complete the Release Checklist to be able to release the Series.

There are 3 packages that are automatically created:
As Seasons and Episodes are created, all three of these packages will automatically update to include the new videos.

The first time you visit the Manage Series tab it will contain no Seasons and no Episodes. 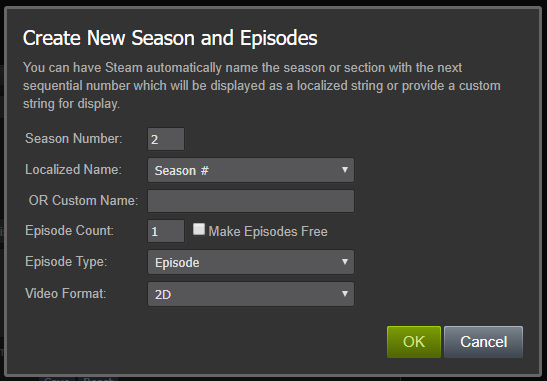 During the Episode creation process, an Episode App is created for each episode requested. Just like a Series App, this Episode app is the thing customers receive when they buy the episode either individually, through Season Bundles or the Series. For each episode you will need to submit episode metadata, ingest the video file, set up subtitles and set the pricing. However, the majority of that can be completed through the Manage Series tab and the platform will do a lot of the work for you.

During Episode creation three packages are created, each containing just the Episode App. It's unlikely you will ever need to adjust the contents of these individual episode packages. The Store or CD Key package will be the one that is priced for sale.

For each Episode that you create, there is a small set of data that needs to be entered so that the episode is shown correctly on the Steam Store.

Now repeat for each episode and you'll have the metadata entered for all the episodes in a season!

If you are more comfortable with using Excel to prepare your data, there is an option to Export and Import the Episode metadata for the Series via a CSV file.

Note: You will still need to upload Header Capsule Images episode by episode.

If you need to add episodes to a season after the initial Create New Season process, you can click the Add Episodes to Season button below the list of existing episodes. 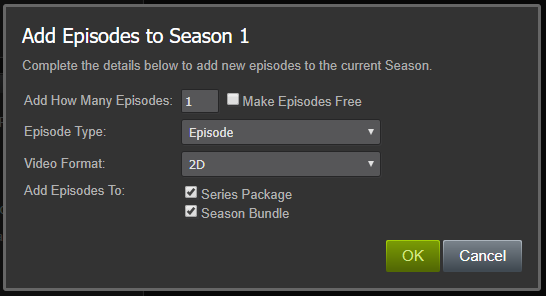 Similar to Create New Season, you can set the number of episodes to add, if they should be free and the type of episode to be created. In addition, you can selectively choose to add the new episodes to the Series package and the associated Season Bundle.

If the Season Bundle is already live and for sale, you will not be able to automatically add the new episodes to the Bundle. Please contact the Steam Business team to discuss options for adding episodes after a Season Bundle is live.

Each episode that is to be sold needs a price assigned to it. That can be achieved in two different ways:
Set the price for each episode and submit the pricing changes. Review our Pricing Best Practices for additional information.

Note: If an Episode should only be available as part of a Series (such as Tutorial) you do not need to set a price on the episode.

Each episode needs a video file uploaded for ingestion into the video platform. This is the same ingestion process used for films and standalone video content.

Once the video has been processed (usually 1.5x - 2.0x the length of the video content), you can upload any subtitles or captions or define the languages for the video and audio tracks.

If you believe you've completed all the steps but the Checklist remains as Not Done, click the Video Landing Page link next to the episode metadata. That will pop open a window to the Episode App landing page and you can review the checklist on the right-side to determine what isn't completed.

The final stage of getting an episode to appear on the Steam Store is to make sure the Series App is released. You can release the Series either before or after the first episode is published and only needs to be completed once.

To release the Series App, you first need to complete the Release Checklist as displayed on the Series App landing page. Once the checklist has been completed, submit the Series App for Review. Please allow a few days for the review to be completed. Once approved you can set the Series into either Coming Soon or a Release state, just like with the episodes. Pre-Purchasing an entire Series is supported but requires the Steam Business team to complete the setup.

Once the Series App is released, the Store page will be available and any episodes published will be shown on the store page for purchase. At the same time the Community Hub will be created, the Series can appear on users profiles, etc.

When a season is created, a Season Bundle is also created and all the episodes for the season are added to the bundle. The bundle is configured as a Complete the Set so that customers can purchase the Season whether they own none or some of the episodes in the Season. Because of this configuration option, it is strongly advised to not adjust the content in a Bundle after it is released. If you have a scenario that requires modifying Bundle content after it is available for purchase, please contact the Steam Business team.

To configure a Season bundle, click the Season Bundle link. A window will pop open to the Bundle configuration page. Documentation on Bundles can be found here.

Series appear in the Videos section of the Steam Client Library. Series are automatically grouped and categorized based on the Series name. The order of the episodes is maintained in the library. A customer can then select any individual episode to watch. 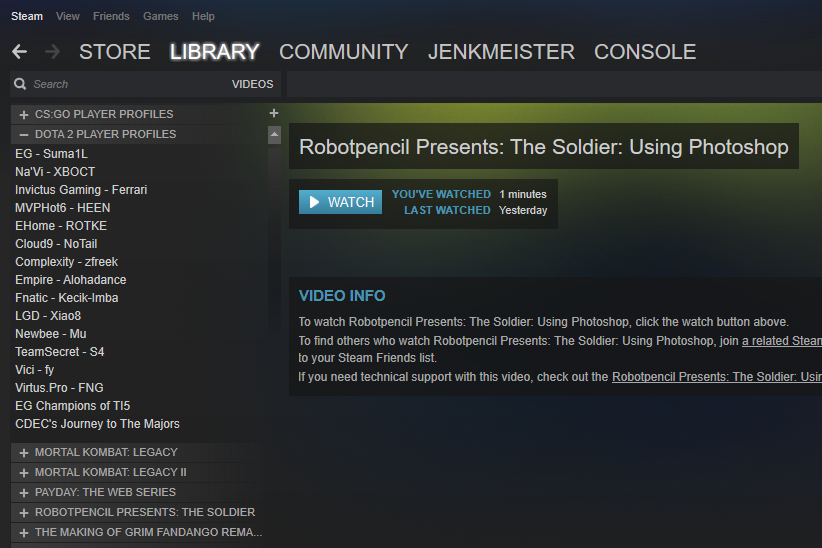 Other Things You Should Know

The Series and Episodic Platform will continue to evolve through as more content is launched and new scenarios need to be supported. Below are some other things to keep in mind during this development period.

Trading cards can be configured for a Series in the same way as for a film or a game. The playtime required for trading cards to drop is accumulated across watching any episodes in a Series. Please see the Trading Card documentation for more information.

Note: Trading cards will only be earned by a user who purchases the Series package, not with Season by Season or Episode by Episode purchases. We will address this in a future update to Series Trading Cards.

If you need to move an existing episode between seasons, please contact the Steam Business team to assist.

Once an episode has been released, you are free to update the metadata, replace the video file, update pricing as appropriate. Please be aware that clicking Save on an episode will cause that change to publish immediately and will take more time than saving episode metadata before release.

If you choose to use the Import Metadata tool on content that has been released you may wish to wander off and get a coffee while the data is updated and all the changes publish out.

A Community Hub and Discussion forum is automatically created when a Series is released. If you wish to create sub-forums for each Season you can do that in the Discussion Forum admin tools.

Playlists for a Series

When a customer looks in their Steam Library, they will find the content of Series automatically categorized and sorted in Season and Episode order. They can then play any video from the Library in any order. If a customer plays an episode, the next episode in the Series will be shown on the Play Next button in the video player. Future options may include custom playlists and resuming Series playback automatically.

When a user has watched at least 5 minutes of an Episode, they can write a review for it. That review is rolled up and is visible on the Series Store page and in the Community Hub for the Series. Likewise playtime (or watch time) is rolled up to the Series App for display on the users profile. Individual episode activity is not shown on the profile.

A Series will show up in the Financial Stats site along with each individual Episode. You can see total sales across a Series along with total users watching the Series. If you look at the Bundles section, you can see sales for season bundles.